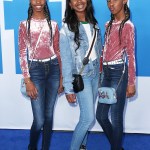 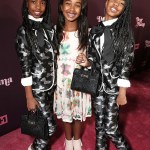 D’Lila and Jessie Combs sent their famous dad, Diddy, the sweetest message on Instagram for his 50th birthday on Nov. 4. Plus, they posted the cutest photo with him to commemorate the special day.

Diddy was showered with love on his 50th birthday, but perhaps the most special message of all came from his twin daughters, D’Lila and Jessie Combs, 12. The girls share a verified Instagram account, and they posted such a cute photo with their famous dad on his Nov. 4. birthday. In the pic, D’Lila and Jessie are wearing matching white outfits, with their arms wrapped around each Diddy from each side. “Happy Birthday,” they wrote. “Daddy you are the best dad anyone could ever have. Hope you have an amazing day today LOVE YA.”

The bond between Diddy and his twin girls has strengthened more than ever over the last year, following the loss of the twins’ mother, Kim Porter, in Nov. 2018. Diddy and Kim were not together at the time of her death, but they were extremely amicable and worked together well as co-parents before she died from pneumonia. Although the twins were just 11 years old when they lost their mom, remained extremely strong while dealing with the tragedy. In fact, Diddy previously credited D’Lila and Jessie with helping him cope with Kim’s death.

In the months after Kim passed away, Diddy expressed regret over not marrying her when they were together on and off from 1994 until 2007. The two split just months after the birth of D’Lila and Jessie, as Kim found out that the rapper had been unfaithful to her. In fact, he fathered another daughter, Chance, just five months before the twins were born.

🎉Happy Birthday🎉 Daddy you are the best dad anyone could ever have. Hope you have an amazing day today LOVE YA♥️

Kim is also the mother of Diddy’s son, Christian Combs, 21, and Diddy adopted her son, Quincy, 28, from a previous relationship. Diddy also has a son, Justin, 25, with his ex, Misa Hylton-Brim.

Of course, the rest of Diddy’s kids also sent him birthday love. “Happy 50th birthday daddy!” Chance wrote. “I love you so much. I can’t wait to celebrate with you.” Christian wrote, “Happy birthday to my pops!! Aka my hero, my twin! I love you” and Quincy gushed, “What you showed us can’t be taught & what you gave us can’t be bought! Thank you for leading the way. Love you so much! It’s halftime! Happy Birthday pops!”