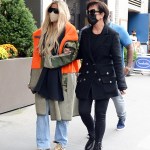 Rob Kardashian has been relatively low profile since his weight gain several years ago, and removing himself from ‘Keeping Up’ and other family appearances.

Kris Jenner, 63, is proud of her son Rob‘s transformation.  “Kris Jenner is very happy that Rob is feeling confident again and coming out more,” a source spills to HollywoodLife EXCLUSIVELY. “Kris has been worried for Rob for years. She’s been doing everything in her power to get him help always, the whole family has.” The 32-year-old was recently seen looking noticeably slimmer on Halloween as well as at older sister Kim‘s 39th birthday party, and looked healthier and happier than he has in years!

Rob’s dramatic weight gain happened during a bout of depression, and, at his heaviest, he admitted he hit a whopping 250 pounds. As a result, the reality star was then diagnosed with Type 1 diabetes, forcing him to take better care of himself and his health. “Kris has been worried for Rob for years. She’s been doing everything in her power to get him help always, the whole family has,” the source continues. “There were were Rob wouldn’t leave the house for weeks at a time, so she’s so happy he’s feeling better.” As we previously reported, health has become a priority for Rob not just for himself, but for his 2-year-old daughter Dream who he shares with ex Blac Chyna.

While we can’t get enough of Dream on Instagram, Rob himself has kept a low profile in recent years —  removing himself from Keeping Up With The Kardashians and even declining to appear in the annual KarJenner clan Christmas card. “Kris was so upset when Rob decided not to do Keeping Up and their big family holiday shoots anymore and they had several disagreements over it,” the insider adds. “These are memories to have on film for Kris and she’s such a family person. Kim and Khloe especially tried to be the peacemakers in all of that. They really went to bat for Rob and understood where he was coming from. Kylie also really related, too.”

Rob certainly looked like his old self again on Halloween, and mama Kris is his biggest cheerleader! “Kris is so proud of Rob and really happy he’s being more social again. She would love to have him be a part of the family holiday card and even filming again this year,” the insider concluded. “She’s hopeful in due time it’ll happen.” So are we!