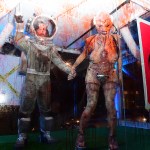 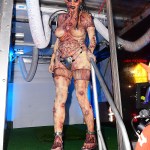 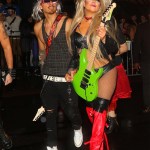 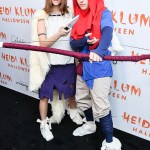 Mariah Carey absolutely slayed her costume for Heidi Klum’s Halloween party when she dressed up as a rockstar with sexy fishnets & a see-through bodysuit!

We’re so used to seeing Mariah Carey, 49, all glammed up in sequin gowns that we were totally shocked to see her dressed up as a rockstar for Heidi Klum’s 20th annual Halloween party at Cathédrale in New York City on Oct. 31. Mariah arrived with her boyfriend, Bryan Tanaka, 36, as the couple dressed up as ’80s rockstars and Mariah’s costume featured fishnet stockings and a see-through bodysuit. The singer rocked a black leather bra, putting her cleavage on full display, paired with low-rise black leather underwear. Her torso was completely showing, with only a thin sheer fishnet bodysuit covering her stomach. She topped her look off with fishnet rights, showing off her toned legs. On top of her bra, she wore a cropped black leather jacket, while over-the-knee black and red leather boots tied her look together.

Aside from her actual outfit, Mariah’s accessories were everything. First of all, she wore a platinum blonde super long wig with a mullet at the top and spiked bangs in the front. A dark black smokey eye with glitter eyeliner and a hot pink lip completed her glam, while red and silver chain choker necklaces completed her unbelievable look. Meanwhile, Bryan, was right by her side rocked an oversized black tank top that showed off his abs, aired with low-rise black ripped skinny jeans, a white leather studded belt, an electric guitar, and a metallic silver mullet wig. The couple absolutely killed their costumes this year.

Not only did Mariah and Bryan slay their costumes for the party, the hostess with the mostess, Heidi Klum, 46, also looked fabulous when she dressed up as a terrifying alien with blood and guts hanging off of her body.

There were so many other amazing costumes at the Halloween party and you can see them ll when you click through the gallery above!