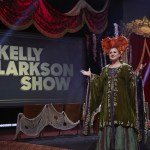 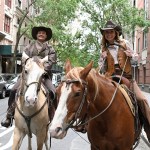 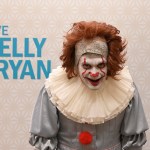 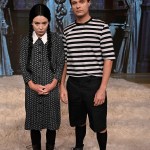 The women of ‘The View’ upped their Halloween game for their 2019 special, slipping on sinister Stephen King costumes for what may have been their scariest costumes yet!

Once again, The View cohosts totally nailed Halloween with their amazing costumes, channeling Stephen King‘s biggest horror hits for a collection of unique — and terrifying — outfits. Did you ever think you would see Sunny Hostin walking around The View studio in full Pennywise drag? Boy, you’re in for a treat. The 2019 Halloween special opened with a hilariously spooky short, called The Viewing, featuring poor Abby Huntsman and Sunny running around backstage while being terrorized by King’s most sinister monsters. Abby’s just trying to get to the building when she’s attacked by a demon car (Christine). Sunny finds a cute little doggie in her dressing room (Joy Behar‘s real-life puppy Bernie!), who turns out to be a vicious monster (Cujo).

Joy can’t help her, though. She’s busy reenacting Misery with Anthony Scaramucci in her dressing room! Meghan McCain finally makes an appearance by channeling Jack Torrance from The Shining, smashing through the door with an axe to let the ladies know that it’s almost time to go on air. As for Whoopi Goldberg? She’s super chill about the whole thing. For the October 31 special episode, the co-hosts continued with the King theme, dressing up in costume as even more of his iconic characters. Sunny was, as mentioned, Pennywise and IT was the stuff of nightmares. She went all in — messed up teeth, red balloon, and all. Abby went as the erstwhile prom queen from Carrie, covered in blood. And Whoopi dressed as the undead cat, Church, from Pet Sematary.

The most surprising moment of an already unpredictable show was Joy and Meghan teaming up to be the Grady Twins from The Shining. Joy and Meghan are always butting heads on The View, and yet, the women chose to wear matching outfits and hold hands an entire episode.

They’re #TheShining's terrifying twosome who could argue about #HotTopics for ever… and ever… and ever… @JoyVBehar and @MeghanMcCain are the Grady sisters! #TheViewing pic.twitter.com/27c40TYSeJ

Last year, the ladies really showed off some great looks, hitting the talk show floor dressed as resilient, powerful women. While she didn’t go for Disney this year, <strong>Meghan McCain</strong>’s 2018 costume as Elsa from the Disney movie <em>Frozen </em>was perfect. Meghan dazzled in the icy blue hues of her gown. However, Meghan did say the reason she chose the costume last year was because people had nicknamed her “the ice queen.” Yikes!

Who could forget, though, when Sunny Hustin was decked out and ready for battle as a warrior from Marvel’s Black Panther? Sunny looked so fierce in her costume. But that wasn’t all! Abby Huntsman channeled early Lady Gaga with an elaborate costume of silver and makeup that looked totally otherworldly. Whoopi Goldberg also donned the perfect costume in honor of her great-granddaughters as Vampirina! Meanwhile Joy Behar went for a double meaning with her costume, dressing up as the Mid-Terminator. She road in a motorcycle and encouraged everyone to go out and vote! These ladies really know how to bring it for Halloween.