Elvis has left, err, entered the building! Jason Momoa, 40, made one heck of an entrance as the late Elvis Presley on The Ellen DeGeneres Show on Oct. 31. He emerged from the back of the audience in a stunning baby pink ensemble that resembled what the “Hound Dog” singer wore during his legendary Aloha From Hawaii concert. The flashy number, which he effortlessly rocked while dancing and lip syncing to Elvis’ “CC Rider”, came equipped with an epic cape, wig and stunner shades. Ellen’s audience, who were also dressed up in their own colorful Halloween costumes, loved every minute of Jason’s homage before he made his way to the stage.

Jason’s love for the legendary performer runs deep. “I am obsessed with Elvis,” he admitted during his sit down with Ellen DeGeneres, 61. “I just love him.” The former Game of Thrones star even bought a classic Pink Cadillac just like the one Elvis had many decades ago! Jason also talked about a crazy moment when he dressed up as the Grammy winner at a legendary yet very naughty hotspot.

The hunky actor told Ellen about how he went as Elvis to the Playboy mansion when he was only 19 years old! A bunch of beautiful women that he worked with on Baywatch (he appeared in the last three seasons of the iconic television series) invited him to the Halloween shindig which also marked his first time ever in Los Angeles. 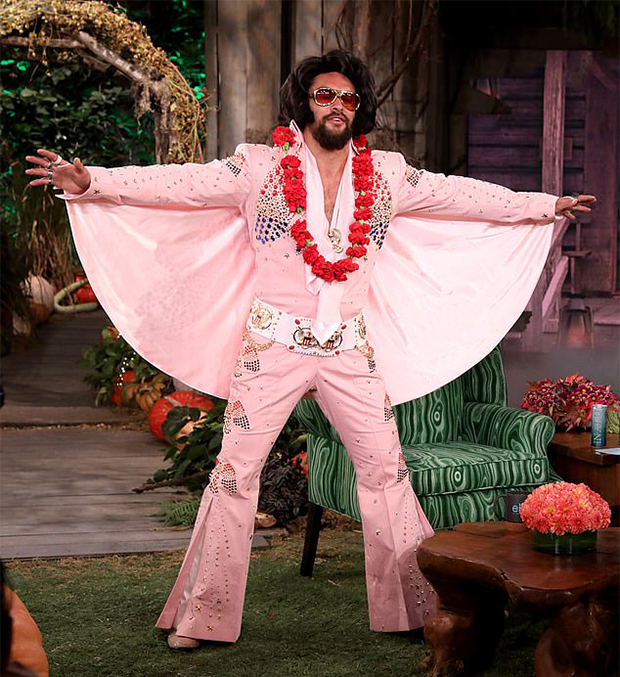 Ellen, who hilariously dressed as Cardi B, 27, in her Hustlers getup, was impressed by Jason’s look. “That’s a fantastic outfit though,” she gushed. “Where did you get that? Did we make that for you?” He said that her people were the ones responsible for putting the sparkly number together which took a whopping three days!

Jason and Ellen also talked about his surprise appearance on Saturday Night Live, where he played a shirtless guilty nurse in a hysterical courtroom sketch starring host Chance The Rapper, 26. “It was hilarious,” he said about his cameo moment while adding that he and Chance “couldn’t keep a straight face.”