Like father, like son! Drake got hilariously creative this Halloween. The “Behind Barz” rapper, 33, took inspiration from his father, Dennis Graham, and recreated one of his many ostentatious looks.

Drizzy paid homage to his dad’s style, dressed in white trousers and a button-up collared t-shirt of the same color. He wore a crotchet white cap that covered his dark hair and a pair of rectangular glasses, similar to a pair his father has donned in the past. The rapper stepped out on October 30 in a sleek pair of black dress shoes. And, a Dennis Graham costume wouldn’t be complete without his signature mustache, which his son sported, along with his own beard.

Drake and Dennis actually celebrated Halloween together at Poppy nightclub in West Hollywood on Wednesday night. And, when they arrived to the bash, the duo was dressed in near-identical outfits, which Drizzy said was “not planned,” in a photo he posted to Instagram. The Euphoria executive producer and his father rocked the same OVO diamond necklace, which had fans and many celebrities cracking up including, LaLa Anthony and Diddy. 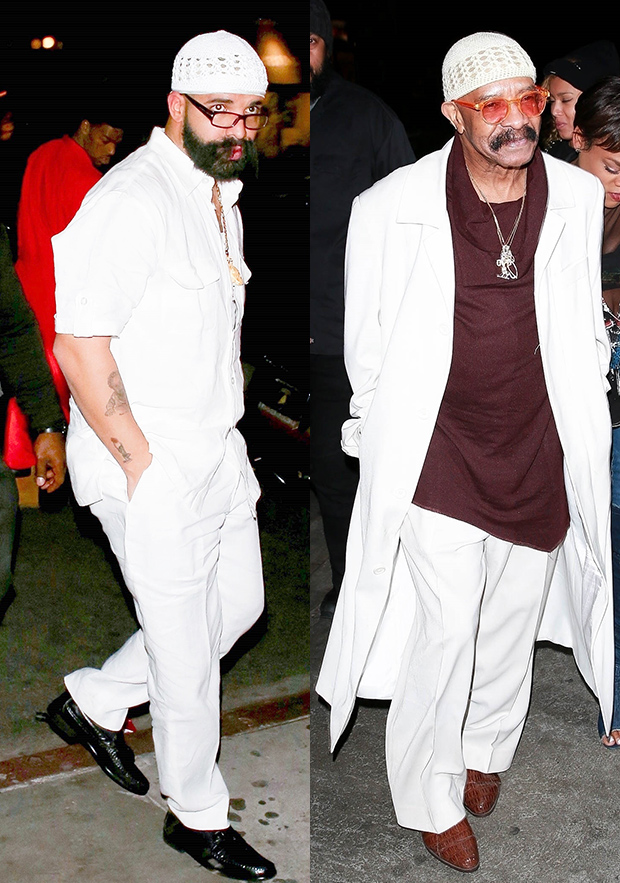 Drake and his father Dennis Graham at at Poppy nightclub in West Hollywood on Wednesday, October 30, 2019. (Photo credit: NGRE / BACKGRID)

The father-son duo reunited just a few weeks after Dennis went on Nick Cannon’s Power 106.1FM morning show on October 1, where he claimed Drake’s lyrics about him being an absentee father are untrue.

Nick went on to admit that his own father wasn’t around the entire time when he was younger, and noted that Dennis and Drake’s situation is “intriguing” because Drake seemed to have been in a similar position as him.

“I had a conversation with Drake about that. I always been with Drake,” Dennis responded. “I talk — I talk to him if not every day, then every other day. We really got into a deep conversation about that. I said, ‘Drake, why are you saying all of this different stuff about me? Man, this is not cool.  He [said], ‘Dad, it sells records.’ Uh-okay. Okay, well [we’re] cool,” he continued as Nick laughed and said, “I wish my dad was that understanding!”

After Drizzy caught wind of the interview, he shared a lengthy message on Instagram and admitted that his father’s interview upset him.

“Woke up today so hurt man. My father will say anything to anyone that’s willing to listen to him,” Drake wrote in a note on his Instagram Story on October 8. “It’s sad when family gets like this, but what can we really do that’s the people we are stuck with.” Drake added that, “Every bar I ever spit was the truth and the truth is hard for some people to accept.” Nonetheless, it appears as though Drake and Dennis worked through it.