Angelina Jolie appeared to be in great spirits while out with a few of her kids on the Spanish Island of Fuerteventura in Spain on Monday. The Maleficent actress, 44, was pictured smiling in a slew of photos from a shopping trip with daughter Zahara, 14, and twins Knox and Vivienne, both 11. The family walked around the sunny streets of Spain and hit a few spots, including a discount store, as seen in the below photos.

The filmmaker was dressed in a white, flowy dress that fell below her knees. The short sleeve number, which featured a sweetheart neck, had a cinching tie around its torso that accounted her fit physique. Angelina sported rectangular sunnies with a brown bag and beige, open-toe sandals. Earlier in the day, Angie was spotted in another outfit — a sultry white slip dress — while on a grocery run with Vivienne.

Angelina, who is about to begin filming the Marvel movie The Eternals, was pictured without her other three children, Maddox, 18, Pax, 15, and Shiloh, 13. It’s unclear where Pax and Shiloh were at the time of the family outing. However, Maddox is in South Korea where he is enrolled in his freshman year of college. Video footage of a tearful Angie dropping her eldest child off at school surfaced in late August. 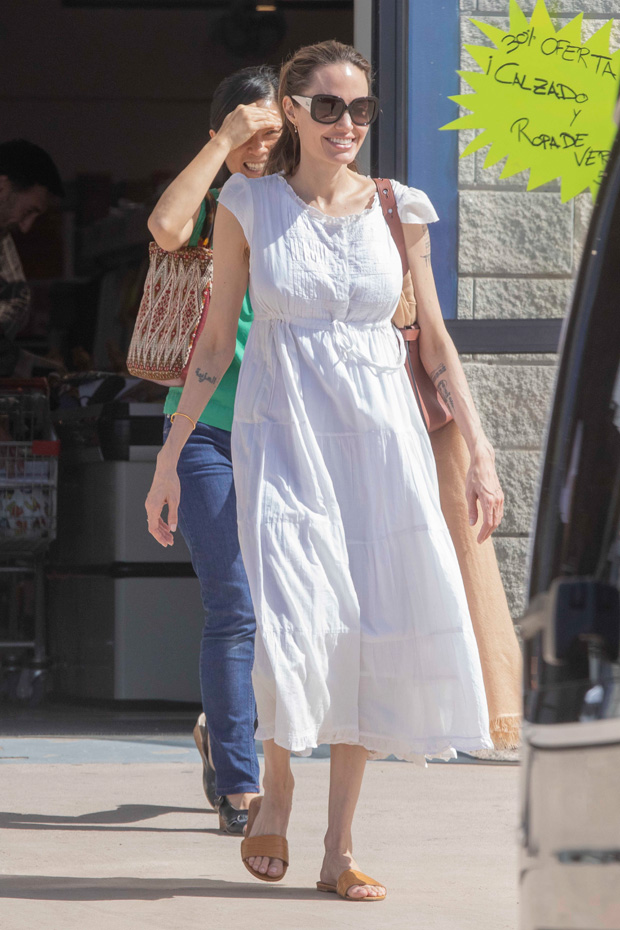 Angelina Jolie is all smiles in a white dress while out shopping in Spain on Monday, October 28, 2019. (Photo credit: MEGA) 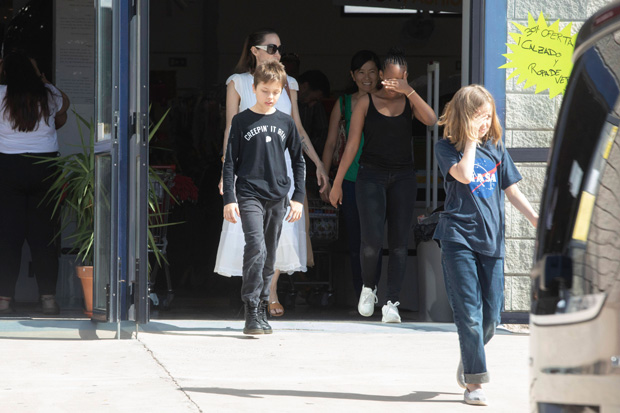 Angie, who is still navigating co-parenting efforts with her ex, Brad Pitt, has kept busy with work following the couple’s 2016 split and subsequent custody battle.

Back in September 2016, fans may recall that Brad and Maddox had a falling out, right around the time his famous parents split. The father-son duo had an alleged volatile argument while on a private plane with Angelina, that led to their now estranged relationship. Brad was eventually cleared of any wrongdoing in November 2016. Brad and Angelina’s divorce still has not been finalized.

Angelina adopted son Maddox, her first child, from Cambodia in 2002 when he was seven months old. She adopted her first daughter, Zahara from Ethiopia in 2005. Angie gave birth to her first child (with Brad), Shiloh, in Namibia in 2007. Also that year, the couple adopted Pax from Ho Chi Minh City, Vietnam when he was three-years-old. Then, the ex-couple’s youngest children, twins — a son and daughter — Knox and Vivienne were born in Nice, France in 2008.