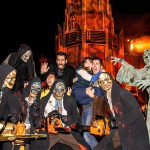 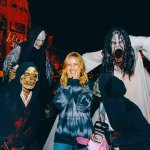 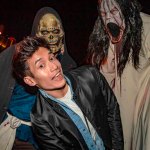 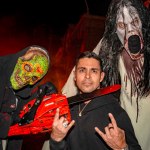 L.A. has so many good scary Halloween events, and celebs love to get a good fright in before Oct. 31. Universal Studios Hollywood’s Halloween Horror Nights is a big draw that has seen the likes of Selena Gomez, Camila Cabello, Vanessa Hudgens, Zooey Deschanel and her Property Brothers boyfriend Jonathan Scott get terrified in 2019 by the ghouls and monsters that haunt and roam the normally family friendly park during September and October evenings.

Camila paid a visit to the haunted park on Sept. 21 and was pictured  with her eyes closed letting out a big scream while two ghouls looked threatening on either side of her. Universal’s annual fright fest began Sept. 12 and runs on select evenings through Nov. 3. Jonathan picked up Zooey and held her in his arms to protect her from a fleet of chainsaw wielding boogeymen when they paid a visit to the scare-fest on Oct. 19. In the photo they posed for, both were seen with their mouths wide open letting out terrified screams.

Selena went makeup free and dressed down for her visit to the Horror Nights on Sept. 22. While the rest of Hollywood was attending post-Emmy bashes, she wore an oversized black t-shirt and black jeans as she went fairly unnoticed except for the bodyguard trailing behind her. She was joined by a group of friends as they got their fright on in the various scary themed mazes.  Millie Bobby Brown got in a good scream in 2018 when she attended the studio’s Orlando location and hit up the Stranger Things maze devoted to her Netflix series.

The kids from @JordanPeele’s Us and their families came face to face with our maze based on the film and got just as scared as we did when we saw it in theaters. So we’ll take that as a win. pic.twitter.com/WW7JW1zrJD

One of this year’s new attractions is devoted to Jordan Peele‘s thriller Us, and the kids from the cast got a huge scare as they went through the maze devoted to their movie. In addition to Universal, there’s LA’s Haunted Hayride in Griffith Park. Actress Kathryn Hahn was there for the grand opening, posing in front of a row of spooky Jack ‘O Lanterns.