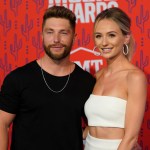 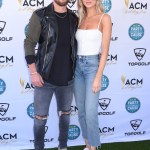 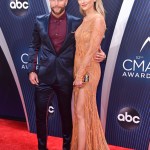 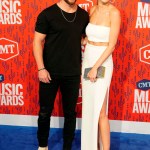 Chris Lane and Lauren Bushnell exchanged vows in a “secret garden” ceremony only 3 months after he proposed!

Chris Lane, 34, and Lauren Bushnell, 29, are married! The adorable couple tied the knot in front of friends and family in their home of Nashville, TN. They kept things intimate with only 160 guests, reports People magazine. Lauren stunned in a simple and elegant sleeveless gown designed by Nashville designer Olia Zavozina, giving us serious Carolyn Bessette Kennedy vibes. She paired the dress with a classic veil and a gorgeous bouquet of flowers. Her groom was dapper in a timeless black tux and white shirt.

“I’ve just looked forward to the day for quite some time and I’m glad that it’s finally here,” Chris told the magazine. “I feel like I’m the luckiest guy in the world to be marrying her.” The sentiment was echoed by his gorgeous bride. “I feel like the luckiest girl,” Lauren gushed. “We both recognize what we have is special, and we feel very lucky.”

The country singer and the former Bachelor star quickly rushed to the alter, only a year after taking their love public! The couple got engaged in June after moving together in March, and now, they’ve made things legal. The romance initially got off to a slow start: they originally met in 2015 at a radio event in Austin, TX, starting as friends. As acquaintances, Chris “randomly” asked Lauren if she wanted to come on a vacation to the Bahamas with a few of his friends — and she said yes! Lauren revealed that feelings were in the air after the trip, but there were a few red flags — namely, Chris said he wanted to be “single” forever. “He didn’t know if he wanted kids,” Lauren revealed. “Chris decided to use our entire trip to completely scare me away.”

Lauren admittedly wasn’t open to a relationship at the time. “I think I was just very guarded and protecting myself,” she continued. After the trip, Chris returned home to Nashville while Lauren returned to LA — but Chris couldn’t get her off his mind! They started communicating regularly over the phone and via text, eventually falling in love long distance! They made a public appearance during the Country Music Awards last November and several months later, Chris popped the question in with a 3.5 carat emerald cut diamond!

“I just wanted to get her exactly what she wants. I feel like that’s a practical way to do it,” Chris said of their June engagement, which took place at her parents’ home in Portland, OR.