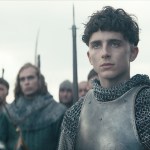 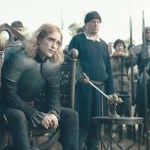 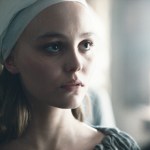 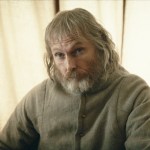 Timothée Chalamet rises as King Henry V and finds an enemy in Robert Pattinson’s French prince in ‘The King.’ The new trailer gives us an epic showdown between King Henry and the Dauphin of France.

When Prince Hal (Timothée Chalamet) rises to the English throne as King Henry V after turning his back on royal life, he faces the enemies his father left behind in The King. This brings him face-to-face with the Dauphin of France, played by Robert Pattinson, who is sporting long blonde hair and a French accent. The Dauphin is not to be messed with. “Surrender to me!” the Dauphin yells at Henry during what appears to be a negotiation. The Dauphin later asks, “King of England, are you scared?” Henry is not intimidated. He charges right into the thick of the battle and fights alongside his men.

But the Dauphin is not the only foe that King Henry has to confront. Palace politics make him question everyone in his life. “I need men around me I can trust,” Henry tells his close friend, John Falstaff. At Henry’s insistence, Falstaff comes to the palace to support Henry as his most trusted advisor.

Henry vows to be a different king than his estranged father. “Now you’ll be watched over by an altogether different king,” Henry says. He later adds: “Already, I can feel the weight of this crown I wear.” The film is inspired by William Shakespeare’s works about King Henry V.

The movie also stars Ben Mendelsohn as King Henry IV, Sean Harris as William Gascoigne, and Lily-Rose Depp as Catherine. In the trailer, Lily-Rose has a brief scene where her character asks Henry, “Do you feel a sense of achievement?” We’re anxious to see where that conversation goes! The King is in theaters in select cities now. The movie will begin streaming on Netflix on Nov. 1.