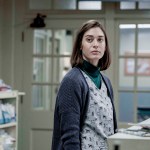 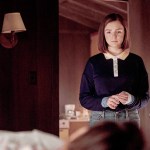 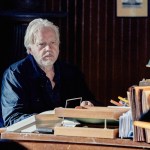 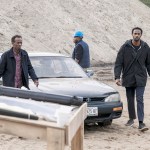 ‘Castle Rock’ returns for season 2 and Elsie Fisher is playing a brand-new character in the Stephen King universe. Elsie spoke EXCLUSIVELY with HL about her character, Joy’s relationship with Annie, and more.

Elsie Fisher stars as Joy Wilkes, Annie Wilkes’s daughter in the second season of Castle Rock. The first 3 episodes of the new season premiere Oct. 23 on Hulu. Everyone knows who Annie Wilkes is from Stephen King’s bestselling novel and the 1990 film adaptation, but Joy is a new character created for Castle Rock. HollywoodLife sat down with Elsie at the press junket for the Hulu series to talk about her exciting new role.

Elsie revealed that the role of Joy came along right after she finished press for her breakout movie Eighth Grade. She opened up about working alongside Lizzy Caplan, who plays her onscreen mother. Elsie said Lizzy was the “best scene partner ever.” She also teased Annie and Joy’s complicated mother-daughter dynamic and how that will evolve over the course of the season. See our full Q&A below.

What drew you to the role of Joy?
Elsie Fisher: I love the show. I think it’s great. It was one of the first things that came my way after I finished up press for Eighth Grade, and Joy starts off in some ways similar to my character from that film, Kayla, and I felt like that was a good transition point for me not working for like over a year and a half and then working again. I love the show and Lizzy is so good. It’s just too much good stuff not to take it. I’m so glad I did.

What was it like witnessing Lizzy in character for the first time?
Elsie Fisher: Some of the first stuff we did, actually, was in the beginning of episode one where we sang “Let The River Run” by Carly Simon, so that was a bonding experience for sure. But seeing her be in character, she’s such a talented actress and puts so much time and dedication into the role. It’s like you forget everything else and you’re just living this moment. We’ve done some really heavy stuff where it’s like she was just the best scene partner ever. She made it so easy for me to do my job and be Joy. She’s terrifying at points, like terrifying, but also so loving and heartwarming. That contrast was a lot.

What can you tease about that mother-daughter dynamic?
Elsie Fisher: They don’t have a typical mother-daughter relationship. It’s still very, very loving, but Joy’s also a teenager now, and she’s trying to explore herself and be her own person for once. I think we should all know that Annie’s not great at letting things go. So that’s a big problem for them, and then also having that happen in Castle Rock. There are so many things that go wrong, but I think despite what goes wrong, they always find their way back to each other. But Joy is very concerned about her mother.

That’s a pretty terrifying thing because you would think it’s the reverse, with a mother worrying about her daughter. Whereas Joy is like, who is my mom? What is she doing? Is she okay? Like there are so many questions that Joy has to ask.
Elsie Fisher: Joy has been with Annie her whole life and pretty much only Annie because they’ve been on the road. Part of it is that Joy approaches her mother’s sanity with a very methodical and caring approach, like a nurse would because that’s how Annie taught her to approach it, to not be scared of the situation. Then part of her is that she’s also 16, and her mom’s doing all this crazy stuff, so it goes back to like the relationship being double-sided. There are so many facets to it. She has a lot of questions.

So how does Joy fit into that? She’s a teenager, she wants to rebel, experience life, but her mother is just so clinical and wants to protect her to a very extreme extent.
Elsie Fisher: I think Joy feeds into that a little bit, at least in the beginning, because it was just how she was raised. I guess I don’t know if feeding into it is the right word, but she’s comfortable with it. I think Joy’s definitely starting to have her own questions and realize how weird that is, and when she starts exploring her own identity, especially in Castle Rock and the people she comes across, she starts realizing that maybe these things are kind of weird that my mom’s been doing my whole life to me. Is this how normal people do stuff like that? It’s a mixture of just wanting to be there with her mom and her mom’s not willing to let go. She just wants to explore who she is.

Given what we already know about Annie Wilkes, when you got the script were scared of what might happen to your character?
Elsie Fisher: I mean yes and no but Misery does take place a good deal of time after Castle Rock. Joy’s already 16, so the end of the show and her story doesn’t necessarily define her story in Misery. But it was weird walking into it and not having this character ever be mentioned in Misery. But I mean, it felt framed for me [in Castle Rock]. I don’t think I could do what Lizzy has done with Annie, which is be so faithful and take in all the Annie content and form her thing. It was very refreshing for me, as a person, to step into this role and be like, “Okay, who is Joy? What am I going to help make her into? And what’s her relationship with the mom that she sees right now and not Misery Annie?”

What’s your favorite Stephen King project?
Elsie Fisher: The Langoliers and The Mist were books my dad used to read me as a kid, so they weirdly make me feel all warm and nice inside. Nostalgic. I feel like saying Misery is too on the nose, but I’m really enjoying it and I enjoyed it when I first saw it too.