Kate Beckinsale is the red carpet gift that keeps on giving! The actress bared her toned tummy in a cropped beige blazer at an event for Planned Parenthood on October 21. She paired the coat with high-waist black pants and a matching bandeau.

Kate stepped out in high-waist black baggy trousers with a black bandeau under a cropped blazer. She showed off her abs and glowing skin under the unbuttoned coat that matched her heels. Kate sported her signature long curly ponytail as her pale pink lip shined in the camera lights. Kate has been a longtime advocate for Planned Parenthood.

Just ahead of her appearance at the event Kate stopped by The Tonight Show starring Jimmy Fallon on Sunday, where she revealed a wild thought that has since gone viral. The actress told Jimmy Fallon that she thinks she looks exactly like Deadpool star, Ryan Reynolds. 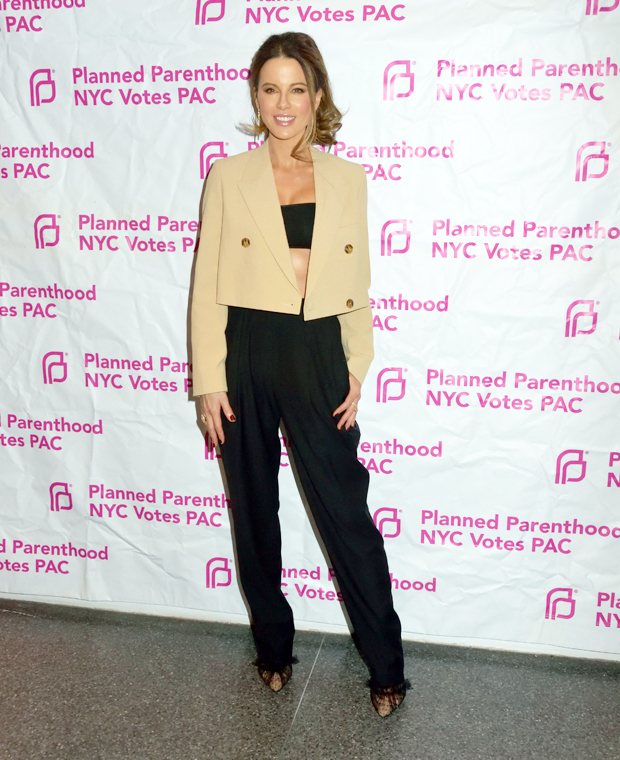 “I look exactly like Ryan Reynolds,” Kate said. “Like in a shocking way. Like, when sometimes, I see a bus going by with a poster on it I think, ‘Damn, I look hot. Oh, wait, that’s not me. Also, I’ve never done that movie.'”

Kate’s appeared to be in good spirits while out and about in New York this week. Not only did she turn heads on the red carpet on Monday, but the Planned Parenthood event also marked the day she reportedly settled her three-year divorce from Underworld director, Len Wisemen. The ex-couple initially filed in 2016. Kate was represented by celebrity powerhouse divorce attorney, Laura Wasser.