Cody and Miley’s romance may be fresh, but things appear serious as he’s already brunching with her mom, Tish! The sighting comes after Cody gushed about his new GF at a Tiffany & Co. event on Oct. 11.

It’s a family affair! Miley Cyrus, 26, stepped out for a sweet brunch date with boyfriend Cody Simpson, 22 and mom Tish Cyrus, 52, on Saturday, Oct. 12. The trio were spotted in the Toluca Lake area of Los Angeles, where Miley listed her Tuscan-style mansion for over $5 million back in August. The outing comes only a day after Cody spilled the beans on his new relationship at Tiffany & Co.’s Mens’ Launch event at the Hollywood Athletic Club on Friday, Oct. 11. “I’m very happy. [Miley’s] creative, she’s very passionate about what she does. I’m very similar in that sense, so I think that’s why we get along so well,” Cody gushed to HollywoodLife at the party, very clearly stating that he’s “not single.” Cody shared an image from the event hours later, and Miley quickly commented “Boo thang” on the model-esque snap (adding the October-appropriate ghost emoji).

Tish was reportedly waiting for the couple inside a local cafe, according to a report by TMZ. Miley and Cody were casually dressed for the weekend outing, as Miley kept her hair in a ponytail and rocked a faded black t-shirt, boot-cut jeans, and a comfy pair of converse. She added a touch of glam with a black Versace purse, emblazoned with a gold “V,” her go-to black belt and stacked bracelets. Cody wore a light pink t-shirt with the words “Pretty Little Thing” written across the chest, a faded pair of blue jeans, and black leather lace-up boots. Mama Tish complimented the stylish pair in jeans and a ripped AC/DC t-shirt.

The outing wasn’t likely Cody’s first time meeting Tish, as Miley and Cody’s friendship dates back years: Miley helped Cody ring in his 18th birthday years ago, and he also joined her on a trip with then-boyfriend Patrick Schwarznegger. This relationship, however, is Cody’s first-time experiencing a friendship transitioning to romance. “That had never happened to me before. Any girlfriends I’ve had in the past, has always been an immediate romance,” Cody continued at the Tiffany & Co. event. “And so it’s kind of like a different experience, having been friends with somebody before, and like developing naturally into something more. So it’s like a very natural, healthy feeling.” 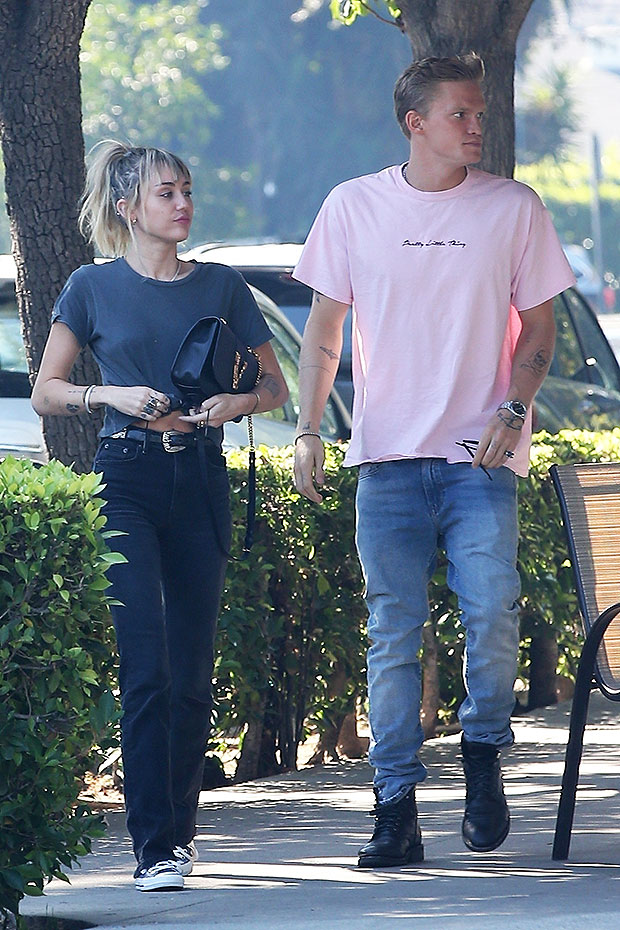 News of Cody and Miley’s relationship broke only a week ago, after the couple were spotted kissing during a date at Backyard Bowls and Blue Bottle Coffee in West Hollywood on Thursday, Oct. 3. Several fans saw them smooching, who quickly spilled the tea on Twitter, while TMZ later got a video of the pair locking lips.

Cody has since been there for Miley after she was hospitalized for tonsillitis, and the “Slide Away” singer even referred to him as her “BF” in one of her Instagram stories. The romantic Cody even sang a song he wrote for his lady, which Miley gushed about on social media!