Jez Dior’s debut album, ‘Handle With Care,’ just dropped! He tells us EXCLUSIVELY why it was ‘important’ to discuss his past substance abuse on the record and why getting clean has left him ‘excited’ for the future.

With a brand new album and a brand new chance at life, Jez Dior is on top of the world. After becoming a fixture in the Los Angeles music scene with his mixtapes and EPs – 2014’s The Funeral and 2016’s Youthenasia – the rapper/singer-songwriter released Handle With Care on Oct. 4. The record is “the story of the first 27 years of my life,” says Jez, “and is the difference between me joining ‘the 27 club’ and living.” As the son of British rocker Steve Dior, a contemporary of iconic punk bands The Sex Pistols and New York Dolls, Jez grew up surrounded by his father’s addiction, which, unfortunately, led to his own substance abuse.

The pain of this struggle, along with his battles with depression, “overwhelming anxiety,” heartbreak, death, and psychological trauma fuel Handle With Care. Written over two years with collaborators ROME (of Sublime With Rome), Chris Wallace (of Lost Kings), and Matt Radd, Handle With Care features appearances by Goody Grace and Jackson Guthy. Yet, it’s Jez’s heart and honesty that never leaves the spotlight. Over the eleven tracks of Handle With Care, he offers a hopeful, uplifting message of hope that transcends genre.

Jez spoke EXCLUSIVELY with HollywoodLife over email about Handle With Care, on getting sober, why it seems music is ditching the “sex, drugs and rock and roll” lifestyle, and ultimate takeaway he hopes everyone gets from his debut album.

HollywoodLife: Handle With Care kicks off with you singing, “Daddy loved to get high.” Dealing with substance abuse is a running theme on the album. Why was it essential for you to focus on these issues on Handle With Care?

Jez Dior: Well, it has always been something very present in my life whether I like it or not… It is important for me to talk about the things that are harder to speak on because I know that there are people that need to hear the story and can relate to mine.

You recently got sober. First off, congrats. Second, and apologies if this is a bit forward, but were you worried that sobriety might negatively affect your music? Clearly, it didn’t, since Handle is a powerful record. But, since rock and hip-hop go hand-in-hand with drugs and alcohol, did that thought cross your mind? Or were you more concerned with getting clean, that all else didn’t matter?

Something I’ve learned while being sober is that honesty is always the best policy. With that being said, to be honest, I wasn’t even close to being sober while writing & recording Handle With Care. So I can’t actually tell you about writing while being sober yet. Moving forward though, I am excited. It’s like a whole new world, and I think the music will be better than ever. I’m not easily influenced by others, so I think I’ll be fine.

A lot of popular music – rock & roll, hip-hop – is deeply entwined with drug use, but it seems there are more songs lately about the downside of getting high. Do you see the culture’s attitudes shifting when it comes to substance use? Or are people just sobering up?

I think that with the deaths of so many young and iconic artists in our genre, its only right that people open their eyes to the truth of what substance abuse can potentially lead to. It’s sad that it had to take that happening to lead to awareness, but that’s how life works, unfortunately.

It wouldn’t be surprising to see a song from Handle With Care top the rock chart. “Nobody Knows” certainly has that edge to it. Do you see Handle as being genreless? Or do you see yourself forging your own “grunge rap” path?

Grunge rap was something I created while making my EP, The Funeral. I’d definitely say there are elements of it on this album, but you’re correct when you asked if I see this album as genre-less… I really tried to make something for everyone on there.

“Please Don’t Go” and “Don’t Worry” have already been released to the public. What was the motivation in having these two songs as the leading singles off of Handle With Care?

it was pretty hard to pick the singles, to be honest…”Don’t You Worry” seemed like a song that the world needed, in my opinion, and “Please Don’t Go” was a song that I needed to put out while going through my break up. 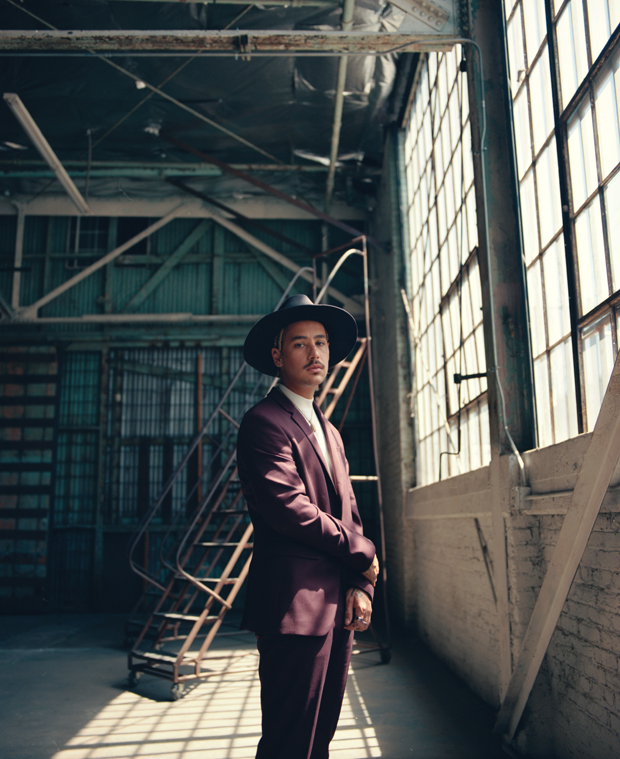 What was one of your favorite moments in recording the record? Did you experience a ‘eureka’ moment during a late-night writing sesh?

I thoroughly enjoyed the whole recording process, it’s always nice to be able to work with people you are so close with. Everybody on my album is like family, so the vibe around the whole thing was really great the entire time.

What’s one of the biggest things you hope listeners take away from Handle With Care? Encouragement to persevere?

Handle With Care is out now.