‘RHOC’ have watched Emily and Shane Simpson’s tumultuous marriage unfold throughout season 14. After Shane took time away from Emily to study for the bar exam, rumors of a divorce began to swirl. She spilled the tea on ‘WWHL’ on Oct. 8!

Emily Simpson has had her fair share of ups and downs throughout her marriage to Shane, as seen on season 14 of The Real Housewives of Orange County. — Many fans would say it’s been more downs than ups, all of which led to recent rumors that the two are headed for a divorce. Per usual, Emily was an open book during an appearance on Watch What Happens Live with Andy Cohen on October 8, where she claimed her marriage is doing just fine.

“People think that you are definitely going to get divorced,” Andy Cohen told Emily during the show. This was after he played uncomfortable clips from the season 14 that showed Shane’s passive aggressive comments to his wife on numerous occasions. Andy even said Shane’s behavior was “devastating.” But still, Emily denied the divorce speculation saying, “Yah, no!”

She explained: “He’s being a d–k, [in the clips.] I get it… I’m not trying to make excuses for him but I see a side of him that other people don’t get to see so I think that’s what makes up for it. I know it sounds awful but I’m the one who goes home with him at night when we’re alone and he says nice things and he gets me cards and he writes nice things to me… He’s obviously smart. He has a high IQ. I just think the d–k part takes over.” 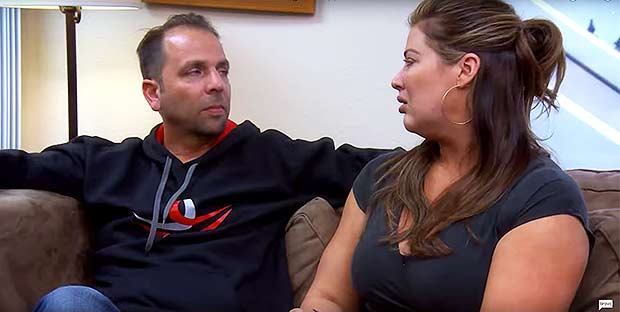 Emily and Shane Simpson during an episode of ‘The Real Housewives of Orange County’ season 14. (Photo credit: Bravo)

While on WWHL, Emily also confirmed rumors that Shane did not pass the bar exam in February, which he took time away from her to study for.

“He got the results in May and he didn’t pass,” she said when a fan phoned in and asked about Shane’s bar exam results.

The newly released midseason trailer for the latter half of RHOC‘s fourteenth season also didn’t help the divorce rumors. In one part of the teaser, Emily and Shane appear to be in some sort of venting or therapy session, where she is in tears.

“I feel hurt and I feel disrespected. I feel like you talk down to me a lot,” she is seen saying to him as the two were filmed sitting together on a couch. Real Housewives of Orange County airs Tuesday nights at 9 p.m. on Bravo.