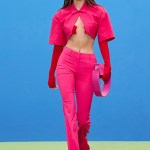 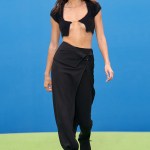 After Kendall Jenner admitted she ‘can’t wait to have a kid,’ during the latest episode  of ‘KUWTK’, it’s all her fans keep talking about! But, did the model mean she wants kids sooner than later? Here’s what we heard…

Slow down with the baby talk when it comes to Kendall Jenner! — That’s what two separate sources close to the model, 23, tell HollywoodLife, exclusively. “Kendall does not have baby fever. It’s still all very hypothetical for her,” one source says, noting that while she is sure she wants kids, her statement on Keeping Up with the Kardashians was future-based.

“When she said she can’t wait for that moment, it didn’t mean she’s planning to start a family anytime soon,” the insider explains. “She still has a lot she wants to accomplish with her modeling career. And, she still considers herself very young. She’s not interested in rushing things.”

A second source went on to explain that the supermodel has a few personal guidelines when it comes to her starting a family of her own. “She wants to eventually have a family, but she wants to be in a fully committed relationship to make it all happen,” the insider explains, adding that she enjoys having those types of conversations with her sisters because they have families of their own. “She isn’t going to have a baby just to have one, but talking with her sisters about it is a way for them to relate to each other.”

While the runway star is “confident” that babies are in her future, she can wait. “It’s fun to talk about, but then reality sets in it’s a different story,” the second source says. “So many other things have to fall into place. Saying it and rushing into it are two totally separate things all together. There will be no pregnancy announcements from Kendall anytime soon.”

Kendall, who keeps rather quiet on Keeping Up with the Kardashians, had fans buzzing after her baby admission on the show’s October 6 episode.

“I can’t wait to have a kid,” the supermodel confessed to Kim Kardashian during the episode. “I’m going to make him do the coolest things, so when he’s older, he’s just a stud.” Kendall said as the two discussed Kim’s daughter, North, 6, going on 16-year-old JoJo Siwa‘s YouTube channel. Kendall is the only Kardashian-Jenner sister who does not have children.