Miley Cyrus is in good hands as she battles tonsillitis. The singer shared a sweet photo of her new beau, Cody Simpson by her side on Monday night, and gushed how lucky she is to have him.

UPDATE 10/8/2019 11:20pm ET: Miley posted a series of IG stories from her hospital room earlier in the day. In one she  shoed herself in her hospital bed with IV’s in her arm. She wrote over it, “Trying to heal as quick as I can to make it to Gorillapalooza w @theellenshow @portiaderossi @brunomars this weekend! Send gooooood vibes my way! Hoping the Rock star G*DS send me a boost of bad ass and help me kick this s–t to the curb where it belongs. We got gorillas to save!” In another Miley showed mom Tish comforting her by brushing her hair.

Cody Simpson is helping nurse Miley Cyrus back to health. After the “Slide” singer, 26, revealed she was bed ridden with tonsillitis, her new man rushed over to her home to comfort her on October 7. “The DR. is back… luckiest,” Miley wrote over a photo of Cody on Instagram Stories. The Aussie singer, 22, was pictured playing the guitar as she rested.

Earlier in the day, Miley shared sad photos of herself laying in bed. “Tonsillitis is a f–king f–k,” she captioned a fresh-faced selfie as she was cuddled up in white sheets. “This f–king blows,” she wrote over another selfie, along with three sick emojis.

Also in the photo of the Cody was a picture frame that read, “Mom I’m gay”. Miley addressed the wall art in the same caption, writing, “Btw mom … there’s been a change of plans”. The statement came as no surprise to fans, seeing as Miley has always been candid about her sexuality. 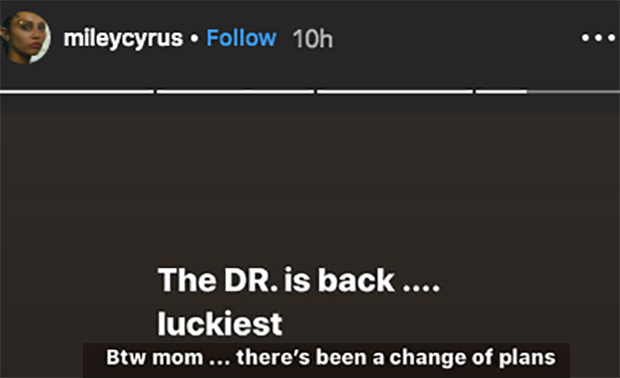 Miley has recently maintained that although she was in a heterosexual relationship, she still identifies as queer. The singer, who is a longtime LGBTQ advocate, has also said that she is “literally open to every single thing that is consenting,” during an interview with Paper in 2015.

Cody and Miley were first linked when they were spotted kissing at Backyard Bowls in West Hollywood on October 3. While they have not confirmed the exact status of their relationship, Miley did address their make-out in a post on social media.

After she shared a shirtless photo of Cody, noting that he’s indeed her “type,” Miley poked fun at the attention surrounding their public kissing session. “Can a girl not get a f—king açai bowl and a morning make out session in peace?!?!” she joked on Instagram.

Miley was previously romantically linked to Kaitlynn Carter, the ex-wife of Brody Jenner. As news of the singer’s split from husband Liam Hemsworth broke, as well as the blogger’s breakup with Brody, Miley and Kaitlynn jetted off to Europe where they were photographed kissing poolside. The two then brought their fling to LA, where they held hands on multiple occasions and attended events together. However, whatever they had was short lived because Miley pulled the plug on their flirty relationship at the end of September.

As for her split with Liam? — He filed for divorce from Miley on August 21, citing “irreconcilable differences,” as seen in official court documents obtained by HollywoodLife. The Hunger Games actor filed the papers just 11 days after a rep for Miley confirmed that the couple decided to “separate” in a statement on August 10. Miley and Liam’s divorce came eight months after they got married in a small ceremony in Tennessee.