Ariel Winter is one of our favorite style stars! The Modern Family actress, 21, makes any outfit look effortless, including her go-to guilty pleasure — denim shorts. Ariel was photographed out in LA on Wednesday dressed in  frayed daisy dukes and a black t-shirt with rainbow writing that read “Courage”. She made her way to a studio in printed white slip-on sneakers.

The television star, who is currently filming the final season ABC’s Modern Family, rocked an up do’ on her casual day out. She wore her black hair in a messy bun with loose hairs that fell on her fresh face. Ariel’s porcelain skin looked smooth and flawless as she showed off her toned legs and arms in her shorts and tee.

Ariel was spotted out and about just one day before her big debut on her “favorite show ever,” Law & Order SVU. The actress guest stars on the hit NBC show’s October 3 episode, titled, “The Darkest Journey Home”. She gushed over the special experience in a sweet message on Instagram, alongside a collage of photos from her various scenes in the episode. 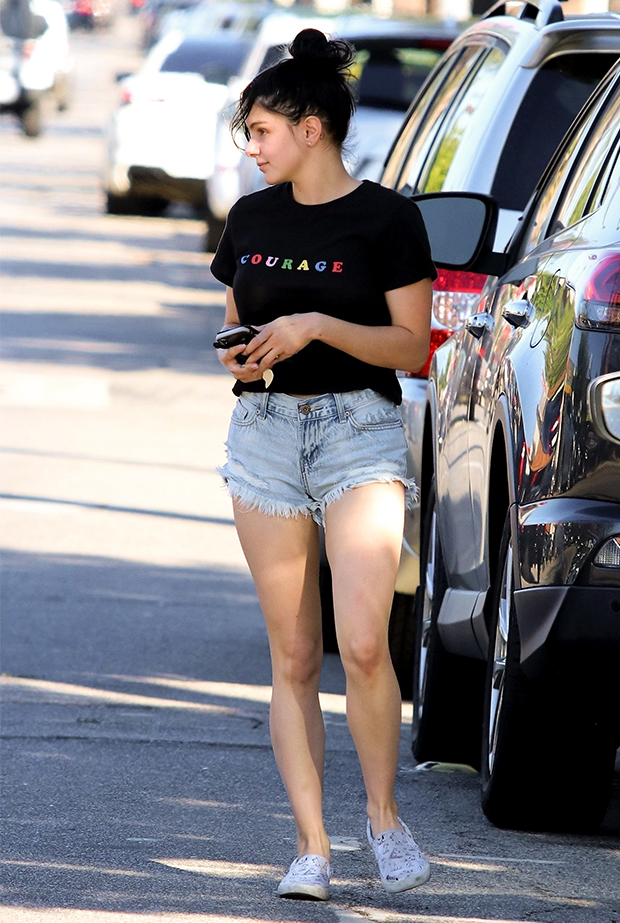 “It was a challenge for me in many ways, both personally and professionally,” Ariel wrote about her character, Reagan, who has red hair in the episode. “I was so nervous and eager because I wanted to do my best alongside such ridiculously talented people. It was an absolute honor to work with their entire cast and crew,” she continued, before going into great detail about her character.

“Reagan is wildly different from any character I’ve played. She’s special to me because she’s a realistic person. She’s not perfect, she’s still figuring herself out. She likes to go out and drink and experiment, and like many of us, she struggles with accepting herself and being honest,” Ariel explained. Fans can see Ariel on Law & Order SVU tonight, October 3 at at 10/9c on NBC.