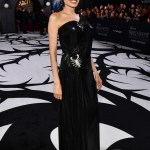 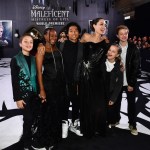 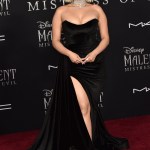 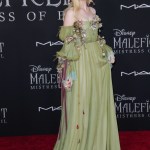 Red hot! Heidi Klum stepped out with her new husband, Tom Kaulitz, at the premiere of ‘Maleficent 2’, where the pair even sneaked a smooch on the red carpet.

Heidi Klum, 46, and Tom Kaulitz‘s, 30, relationship is steamier than ever just months after their Aug. 3 wedding in Italy. The pair showed off their love and their fire looks at the LA premiere of Maleficent: Mistress of Evil on Sept. 30. Heidi was dressed for a night on the town with her hot new man, wearing a strapless red leather mini-dress that cinched her waist and accentuated her figure perfectly. The model finished off the look with a pair of dazzling, silver chandelier earrings and red high heels.

While posing on the red carpet, Tom and Heidi stole a sweet kiss. Cameras captured the intimate moment, with Heidi’s hand on her husband’s waist as she went in for the smooch. Tom was a little more casual than his supermodel wife. He wore a black t-shirt and navy pants, with his long, brown locks draped on his shoulders. He also wore a pair of sneakers with the outfit. While the couple looked hot as ever, Heidi was definitely running the red carpet, with Tom proud to stand by her side.

These two have NOT been shy about their PDA. During their wedding celebrations in Italy, the newlyweds were all over each other, as they made out and showed off their affection in front of their guests. Clearly, they’ve been loving their time as just a couple, and fans should not expect them to add to their family in the near future. “[Heidi has] had conversations with Tom and right now they’re perfect with the love they have for each other and the life they’ve built together,” an insider shared with HollywoodLife EXCLUSIVELY back on August 6, explaining that “having kids isn’t going to dictate their future or relationship one bit.”

Heidi and Tom got engaged back in December 2018, but news of their secret Feb. 22 wedding ceremony didn’t break until months later. The low-key wedding was a nod to the exact day they met in 2018. Of course, they still wanted to share their marriage with friends and family, so they had a second wedding in Capri in August. They’ve been absolutely smitten since! It looks like the honeymoon phase hasn’t completely worn off, and a red carpet premiere was the perfect place to show off their burning love!