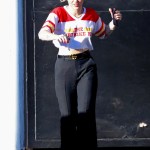 It looks like Miley Cyrus is doing some reflecting after her breakups from Liam Hemsworth and Kaitlynn Carter, and she posted a message that fans think is directed at her exes on Sept. 29.

Miley Cyrus is leaning on her family, and more importantly, her dogs, following her split from Kaitlynn Carter. After taking a soul-searching trip with mom, Tish Cyrus, and sister, Brandi Cyrus, last week, Miley took to Instagram on Sept. 29 to share a photo of herself cuddling up to two of her dogs in bed. Along with the sweet photos, Miley also posted a lengthy message about finding “unconditional love” with her animals, and hinting that that’s something she hasn’t been able to find with another human. Of course, fans are convinced that the post is directed to Kaitlynn and Miley’s other recent ex, Liam Hemsworth.

“Waking up surrounded by animals is my favorite way to start a morning,” Miley wrote. “I am immediately reminded to LOVE without conditions…the best part about animals is that they are careless about the details. They live by the golden rule… Love & Be Loved. Nothing in between. No questions regarding wealth, career, talents, race, age, sex…they love back 100x…all they ask if to be cared for in exchange for loyalty, reliability and faithfulness (reminds me of someone).” She concluded the message with a ‘raised hand’ emoji, hinting that she’s referring to herself in that lasts sentence.

Could this be Miley’s way of saying that Kaitlynn and Liam didn’t give her loyalty, reliability and faithfulness in exchange for her caring for them?! Of course, both breakups were extremely different. Miley had been with Liam on and off for ten years before they split earlier this summer, just months after tying the knot. Obviously, it was an incredibly emotional breakup with a lot of history. Still, she moved on with Kaitlynn fairly quickly, and they ended summer 2019 with a whirlwind romance, which suddenly ended just over one month later.

.@MileyCyrus woke up surrounded by her sweet puppies today! She also shared a sweet message: pic.twitter.com/MGD34KXcbT

Since news of Miley and Liam’s divorce broke at the beginning of August, the singer has been incredibly active on social media and has not shied away from being in the public eye. However, Liam has stepped away from the limelight to spend time with family and friends in Australia. After confirming the separation in August, he revealed that he will not be making any further public comment on the situation.