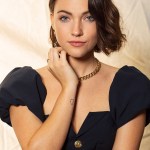 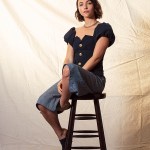 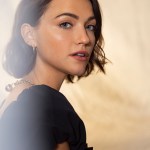 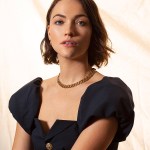 Cara will be going on quite the journey in ‘God Friended Me’ season 2. HL spoke EXCLUSIVELY with Violett Beane about Cara’s arc, how Cara and Miles will ‘come together’ again, and more.

Violett Beane will be returning to your TV screens as Cara Bloom when the CBS series God Friended Me returns for season 2 on Sept. 29. HollywoodLife sat down with Violett to talk about what’s next after that game-changing finale. The actress and 2019 honoree at HollywoodLife’s RepresentHER Awards teased that Cara will be going on a major 3-episode arc in Paris. As Cara is “finding her purpose” in Paris, Miles will be doing the same in New York.

The end of last season featured a major moment in the Cara and Miles relationship. Before she left for Paris, Cara told Miles to not tell her that he loves her. She knew that she wouldn’t go to Paris if he did. Violett revealed that there will be more “development” between Miles and Cara after that epic moment. Their journeys will also connect early on in season 2. Violett also discussed how filming in Paris will add a “huge element” to the show and the entrance of Jessica Lu’s character.

Where are we picking up in season 2?
Violett Beane: At the very end of season 1, we were left with this cliffhanger of Cara going off to Paris and telling Miles not to say that he loves her because if he does, she won’t say it back, and she won’t be able to get on that plane. So we’re left with that and we’re also left with this new character, Joy, who comes in and she’s been contacted by the God account and she’s been given Miles’ name. We pick up in season 2 with Cara being in Paris writing Simon Hayes’s novel and Miles is in New York and he actually hasn’t been able to track down Joy since we saw her. It’s been a few months. Miles and Rakesh are trying to locate her and trying to figure out what is going on. Is the God account done with Miles? Has the God account moved on to someone else? Is it sending her names and not him anymore? While he’s finding his purpose in New York, Cara’s finding her purpose in Paris.

What can you say about the journey that Cara is taking in Paris?
Violett Beane: We go on a 3-episode arc in Paris with Cara. Someone from her past comes back and she kind of helps her realize some things about her life. What we find out is that Cara might be in Paris for a different reason. She might not be in Paris just to write Simon Hayes’s book. Towards the end of this 3-episode arc, we realize that where Miles is in his story, and where Cara is in her story come together and they’re interwoven and connected and they need to be with each other in order to figure it out.

What was filming in Paris like?
Violett Beane: It was amazing. It was wonderful. I’d been to Paris before as a tourist, but to go and be able to see all of these locations and work in them. We filmed in the Louvre at 6:00 a.m. before anyone got there. It was like the sun was rising out on the patio out there and it was gorgeous. It was a really fun experience. I think it’s going to add a huge element to our show. The way that we shot it is gorgeous and highlights Paris.

With the Miles and Cara situation, fans were waiting for that big moment at the end of last season. What can you say about their relationship in season 2?
Violett Beane: You’re definitely going to see some more development with that. I think with Cara telling Miles that he shouldn’t say that he loves her, I think they’re both going to come to question why that was. I think love is hard. It’s hard to give yourself over completely, especially when you’ve been burned before, and that’s something that we’re going to explore with Cara specifically. She’s never felt like that about anybody before, but she’s having a difficult time saying it, so that’s definitely going to be explored early on in the season.

Taking that leap is such a big risk emotionally. I like that the show is tackling that. I also love that the show didn’t just put a big bow on it and tie the relationship up.
Violett Beane: It’s not that easy. At the end of every episode, there is mostly a positive ending and things work out. But I think throughout the main characters and their struggle, we want to show a somewhat realistic depiction of life. It’s not that easy. It’s not like everything gets resolved right away and you’re going to see that a little bit with the two of them.

Joy’s coming into the picture and Cara’s off in Paris for now. What can you tease about her dynamic and how she fits in with the crew?
Violett Beane: Part of it is that she doesn’t really fit in right away, but what she brings to the team is really great. She’s sort of sassy and she doesn’t take no for an answer. She’s a really fun character and I think that they had a lot of fun shooting with her. I filmed a couple episodes with Jessica Lu as well and she’s just great. She brings a really fun dynamic and it doesn’t feel like she’s replacing anyone or anything like that. For Miles, I think he’s a little taken aback by her because he sort of feels like, “Oh, is she the new me?” There’s that kind of dynamic and it ends up being really fun. If she’s been contacted, has anybody else? That’s what I want to know. Is this something that we’re going to be seeing different people around the world who have been contacted by this God, you know what I mean? Who else is in contact and are we going to meet them? They opened up a rabbit hole that they can really go down if they want to.

The first seasons of shows are always about introducing the characters and setting the landscape. Is there anything you’re excited to explore with Cara in season 2 or maybe you want to touch upon?
Violett Beane: One thing for sure is that towards the end of last season, Cara gets fired from her job. When she returns to New York, she’s got to figure it out. What we’re realizing is that it’s not like picking up where she left off. There are new people who have started working at Catapult and she’s got to try and figure out how to work her way back up. I’m excited to see the comeback for her.