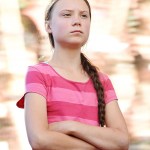 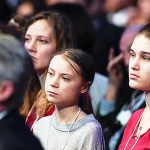 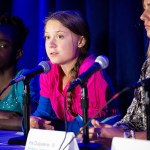 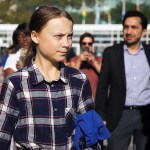 What a stare down — Greta Thunberg, environmental crusader, was caught glaring at Trump before her fiery UN Climate Summit address where she delivered a tearful ultimatum to the world’s leaders.

Greta Thunberg, 16, was caught doling out one of the hardest stares at President Trump as he left the United Nations Climate Action Summit on Sept. 23, and the video of her look is gaining popularity on the internet. The Swedish activist was moved to tears, imploring the world’s leaders to take younger generations’ demand for action on climate change seriously. “I shouldn’t be up here. I should be back in school on the other side of the ocean,” Greta began her impassioned address. “Yet you all come to us for hope. How dare you. You have stolen my dreams and my childhood with your empty words.”

The teenager didn’t end there. Continuing in her address, Greta thundered to her audience, “There will not be any solution or plans in line with these figures here today because these numbers are too uncomfortable and you’re not mature enough to tell it like it is. You are failing us,” she incited to the international delegates. “The young people are starting to understand your betrayal. The eyes of all future generations are upon you.” Through her tears, Greta made one final indictment, “And if you choose to fail us, I say, we will never forgive you. Right here, right now is where we draw the line. The world is waking up and change is coming whether you like it or not.” By the conclusion of her speech, Greta’s words were met with overwhelming applause. It was, however, what happened following her address that has a lot of people paying attention.

Trump didn’t stay long for the UN’s entire presentation on Climate Change, which included speeches from political figures. During his short stay, the President appeared bored, uninterested and even checked his watch as seen by images from the Daily Mail. But before Greta’s fiery indictment, Trump upstaged the teenagers entrance outside of the assembly, with Greta seen glaring at the President. The clip, which lasts merely a few seconds, went viral. Twitter users jumped on the chance to share the clip, with one fan writing, “We are all Greta Thunberg.” Representative Adam Schiff even chimed in to share, “Greta Thunberg, at 16 years old, has more courage and moral clarity on climate change than an entire room of full world leaders.” Watch the clip of Greta staring down Trump below:

We are all Greta Thunberg.
pic.twitter.com/dEyjsfTOJE

Greta Thunberg, at 16 years old, has more courage and moral clarity on climate change than an entire room full of world leaders.

The science is clear. Her anger is justified. If we do not act now to protect our planet, the consequences will be dire. https://t.co/q8zk39seKA

As students walked out of school on Sept. 20 to participate in a world-wide climate strike, Greta, one of the most vocal and youngest voices of the cause, took the fight directly to the world’s leaders. The activist filed a complaint with the United Nations the day of her address, Sept. 23, along with 15 other children from across the world. The complaint alleged that at least five of the world’s major economies have violated their human rights by not taking action against the global climate crisis. Prior to her address at the United Nations Climate Summit, Greta submitted to Congress the Intergovernmental Panel on Climate Change’s Special Report on Global Warming as opposed to her personal testimony. This young crusader, who has been nominated for the Nobel Peace Prize, is staring down her future and asking the world’s leaders to pay attention to her generations’ plight.