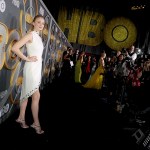 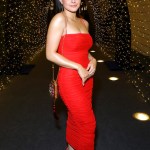 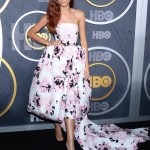 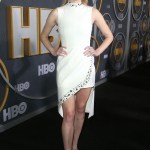 The 2019 Emmy Awards was packed with tons of celebs in gorgeous outfits, but it was their after-party looks that stole the show!

Some of our favorite television stars headed to the 71st Annual Primetime Emmy Awards in LA on September 22, when they arrived on the purple carpet looking fierce in their outfits. While there were some gorgeous looks at the event, it was the after-party ensembles that truly stole the show. Ariel Winter, 21, skipped out on this year’s award show, but she sure made up for it when she hit the Walt Disney after-party in a sexy, skintight bright red midi House of CB Fornarina Dress. The spaghetti strap frock was ruched from top to bottom, revealing her petite figure, while the square neckline was super low cut revealing ample cleavage. She paired the body-hugging dress with matching red ankle-strap sandals, Misahara earrings, Borgioni and Kallati rings, and a bedazzled beaded purse. Gold drop earrings and sleek, middle-parted straight here completed her red hot ensemble.

Zendaya, 23, made quite the statement both on the red carpet and later that night. She first arrived wearing a drop-dead-gorgeous strapless green Vera Wang gown with a completely sheer corset top and a satin skirt with a plunging slit on the side. She accessorized her look with dazzling Cartier jewels. Later that night, she arrived at the HBO party in a pretty strapless floral Alexandre Vauthier gown. The pink and white dress featured a tight bodice, while the skirt was extra poofy and short, with one long side that led into a flowy train. She topped her look off with Anabela Chan earrings and an Yvan Tufenkjian ring, while her hair was done by Unilever Hair Expert, Ursula Stephen.

Sophie Turner, 23, was nominated for Outstanding Supporting Actress in a Drama Series for Game of Thrones, and her red carpet gown was stunning. She arrived in an off-white satin Louis Vuitton gown with a V-neck bodice and a wrap skirt with a plunging slit on the front. She accessorized her first look of the evening with gorgeous Louis Vuitton High Jewelry. As for her late-night look at the HBO party, she rocked a sleeveless tight white mini dress with a high-neckline completely bedazzled in jewels, with an asymmetrical hem, trimmed with jewels and beading. A pair of strappy metallic silver heels completed her look.

Another one of our favorite after-party looks came from Heidi Klum, 46, who headed to the HBO party in a skintight sheer black Rami Kadi gown which was completely covered in intricate beading and jewels, while the plunging V-neckline showed off massive cleavage. She accessorized her ensemble with Brian Atwood heels, a Judith Leiber clutch and Lorraine Schwartz jewels. Aside from Heidi, stars like Olivia Culpo and Kerry Washington attended The Governor’s Ball after-party, where an eyewitness told HollywoodLife EXCLUSIVELY, that Olivia was one of the first stars to arrive. She grabbed two sliders, saying she was starving, and then ate them while wearing her beautiful gown. Meanwhile, Kerry was fangirling out over the This Is Us cast and hung out with them all night at their private table. Sitting at the table was Chris Sullivan, Justin Hartley (who stayed close to wife Chrishell), Dan Fogelman, Chrissy Metz, and Sterling K. Brown.

There were so many other fabulous outfits the celebrities wore to different after-parties, which you can see when you click through the gallery above.