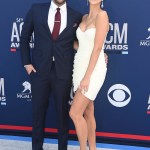 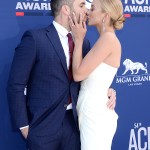 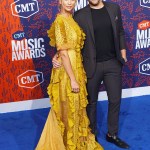 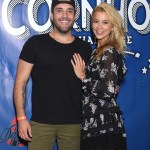 Congratulations to Tyler Rich and Sabina Gadecki — they’re married! The country singer and actress finally tied the knot after more than two years of being engaged.

Tyler Rich, 33, and Sabina Gadecki, 36, are officially husband and wife! It took quite a bit of time for this couple to get wedding planning started, but they finally organized a gorgeous ceremony and reception and tied the knot on Sept. 20, according to PEOPLE. Sabina looked absolutely stunning in her wedding dress, while Tyler was handsome as ever. The lovely ceremony took place at Saddle Woods Farm in Tennessee, and 275 guests were there to celebrate, the outlet reported. In honor of where the bride and groom first met — the Stagecoach country music festival, circa 2016 — they decked out the barn with “pampas grass, macrame, neon lights, bulb string lights, vintage rugs, teepees and couches” to complete the wedding’s music festival theme!

“We met at a music festival and spend so much of our time together on the road at shows [and] festivals,” Tyler and Sabina told PEOPLE. “So we wanted to throw a festival-themed wedding so our guests could take a step into our lives for a night.” Wedding guests were even invited to “find their festival friends,” and every table was named after a music festival.

The love story between Tyler and Sabina is definitely one to talk about! She first caught his eye at the Stagecoach Music Festival in 2016, and he made a point to approach her in the crowd after spotting her from far away. Although they left without anything happening, they did exchange Instagram handles, and he slid into her DMs a few days later. After that, the rest is history! Tyler proposed to Sabina in July 2017, but they’ve both been SO busy with their rising music and acting careers since then that they didn’t have a time to seriously start wedding planning until the beginning of 2019.

When Tyler stopped by HollywoodLife for an EXCLUSIVE interview in Dec. 2018, he admitted that he and Sabina didn’t even have a wedding date set yet. “We’re just super busy,” he explained.”When we go to look at places, they’e already booked.” At the time, he revealed that he didn’t even think the wedding would happen until spring 2020 — but luckily they found the perfect venue to get it done sooner!

Unfortunately, Tyler and Sabina won’t have TOO much time to celebrate now that the wedding is over — he has tour dates through the middle of October, while she has various movies in pre and post production to focus on. Hopefully the end of the year will bring some down time for a REAL honeymoon!