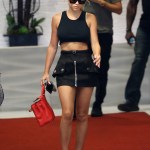 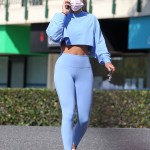 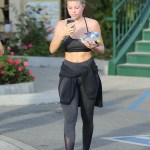 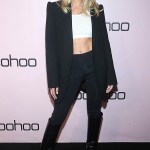 While celebrating the launch of her new clothing line, Sofia Richie looked incredible in a teeny crop top and high-waisted pants — and she had a blast with pal, Kylie Jenner, inside the event!

Sofia Richie, 21, was the star of the evening at the launch of her Missguided x Sofia Richie collection at Bootsy Bellows on Sept. 18. The 21-year-old hit up the event without her boyfriend, Scott Disick, and she looked fierce as ever while walking the carpet before heading inside. Sofia wore a white crop, which put her toned abs on full display. She paired the tiny top with high-waisted leather pants, so her belly button was covered but her six pack was still visible. She also wore an oversized leather jacket atop the outfit, with her blonde hair parted down the middle.

Once inside, Sofia had a blast dancing and singing along to some classic 90s hits by Ginuwine, Aalyiah and more, an eyewitness told HollywoodLife EXCLUSIVELY. Around 10:45 p.m., Kylie Jenner showed up to show her support. The reality star posted videos to her Instagram story of Sofia standing on a chair dancing, and she looked like she was having a blast! Eventually, Christian Combs took the stage for a performance, which lasted about ten minutes, according to our eyewitness.

At one point in the night, Sofia could be overheard telling Kylie, “I miss you, we need to hangout more!” our insider confirmed. The ladies also took a shot together and shared a hug! After that, the ladies took their party into a VIP area, away from the main crowd.

Kylie and Sofia have gotten extremely close this summer — Kylie even invited her on a super lavish, exclusive trip to celebrate the launch of Kylie Skin, which only her closest friends were in attendance for. Then, Sofia and Scott attended Kylie’s birthday trip to Italy in August, and Kylie partied in Vegas with Sofia for her 21st, as well.