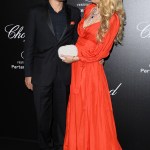 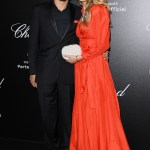 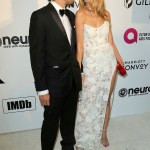 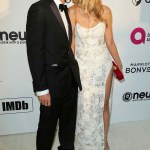 Petra Nemcova is pregnant! The 40-year-old supermodel made the announcement quietly on her Instagram, writing “Our family is expanding and my belly as well. 😉🤰😁Feeling so grateful that the Universe blessed us so quickly with this divine gift. ✨👶✨” on August 24. She then added, “📸 by Ben – The best daddy already! 💜 #Gratitude #BabyJoy #Family” referencing her entrepreneur husband Benjamin Larretche.

In the photo, Petra poses by a gorgeous outdoor swimming pool in a white dress as she cradles her bump. Her two dogs look up adoringly at her, awaiting their new human brother or sister, as their mom smiles back. The gorgeous Petra accessorizes with a straw hat with a black ribbon, and reveals her cluster of star tattoos on her right foot.

The Czech model confirmed she had tied the knot “in a private ceremony with our spiritual guide in a sacred site of Cathedral Rock” on August 2, which is located in scenic Sedona, Arizona. “This location is very special to us because of its powerful energy field and it’s rich indigenous traditions,” she captioned a beautiful photo of the two, that shows them lovingly looking at each other with the red Sedona scenery surrounding them. The couple reportedly met in Mykonos via mutual friends three years before marrying.

Our family is expanding and my belly as well. 😉🤰😁Feeling so grateful that the Universe blessed us so quickly with this divine gift. ✨👶✨ 📸 by Ben – The best daddy already! 💜 #Gratitude #BabyJoy #Family

Shortly after posting the photo, a visibly pregnant Petra attended a fundraiser for Lionsgate Entertainment founder Frank Giustra in Vancouver, BC. At the event, she reportedly referenced her pregnancy, and said that “the world had blessed” her with a baby.

Petra and Benjamin seem more in love than ever on her Instagram, as the mom-to-be posts frequently about her pregnancy and also shares photos of the two together. “My soul is dancing,” she wrote on a photo of the two of them, while on another she thanked her husband for “bringing so much blissful love, constant laughter and light” to her life. Since announcing her pregnancy, Petra seems to be embracing her growing bump as she’s also been sharing plenty of bikini and belly-revealing snaps!