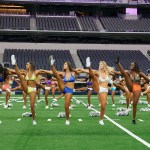 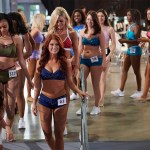 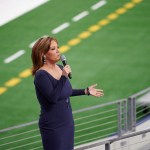 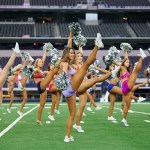 The pressure of training camp continues for the Dallas Cowboys Cheerleaders as they’re tested with learning some hard choreography in this EXCLUSIVE ‘DCC: Making The Team’ sneak peek.

Training camp continues during the Sept. 20 episode of Dallas Cowboys Cheerleaders: Making the Team, and it’s only getting harder for the remaining candidates! In this EXCLUSIVE sneak peek of the upcoming episode, choreographer Tyce Diorio choreographs a routine for the girls that puts them to the test more than ever before. The ladies perform the routine for Tyce, as well as coaches, Kelli Finglass and Judy Trammell, and they’re given constructive criticism for their performances.

“There’s so many things to look at while you’re watching them,” Tyce admits. “The performance aspect of it, how they pick up choreography, how succinct they are with the movements. It’s just all those elements.” The girls impress all their superiors, but one group of rookies at the end falls a little flat. “Were you nervous?” they’re asked. When all three girls nod in agreement, they’re told, “It happens! But you can’t let them see you sweat. Something has to come over you that when it’s go time, you’re like…I got this!”

Tyce jumps in at that point and adds, “You’re all good dancers! But there’s some frayed ends. Just….some things, technically, could be better.” Considering Tyce has frequently judged on So You Think You Can Dance AND has worked with stars like Jennifer Lopez, Taylor Swift, Paula Abdul and Janet Jackson, among others, he’s definitely someone who the ladies would want to take advice from!

All of the candidates seem to be in agreement that they’re willing to take criticism, though, and we’ll see how it all plays out when the full episode airs on Sept. 20 at 9:00 p.m. on CMT!