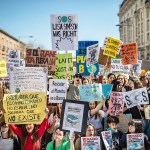 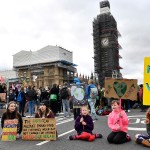 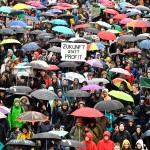 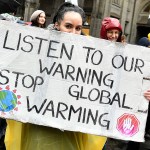 Students around the world are striking on September 20 to demand the adults in charge do something, anything, about the climate change disaster. Learn more about the protest, and how YOU can participate.

ORIGINAL: The future of Planet Earth is at stake, and students worldwide are demanding action. The Global Climate Strike will be held in 600 cities across the United States, and hundreds more across the world on September 20, with students walking out of their schools at noon local time to rally, protest, and let their voices be heard. As the youth organizers put it in their mission statement, “Millions of us will walk out of our workplaces and homes to join young climate strikers on the streets and demand an end to the age of fossil fuels. Our house is on fire — let’s act like it. We demand climate justice for everyone.” Here’s what you should know about what’s likely to become the largest environmental protest ever:

1. The global strike is led by 16-year-old environmental activist Greta Thunberg. Greta, a high schooler from Sweden, has millions of her fellow teens behind her in her battle for climate change action. The inspiring activist, who recently sailed to the United States on a 13-day journey in a zero-emissions boat, will lead a demonstration in NYC’s Foley Square, the famed location of Occupy Wall Street. Following the rally at noon, protestors will march downtown to Battery Park.

Greta made headlines in August 2018 when she started skipping school on Fridays to protest outside the Swedish Parliament. Thousands of students followed her lead with the movement Fridays for Future, striking every week to demand aggressive action on climate change by their governments. Greta arrived in the US on August 28 after her oceanic journey, and is currently in Washington, DC to speak with lawmakers, and will appear at the United Nations on September 23 for the Climate Action Summit.

2. There are 2500 climate strikes planned around the world for September 20. Find your local rally or organizing event HERE. The largest protest is planned for New York City with Greta, but there are 800 total in the United States, and thousands more being held in 150 other countries across six continents. Sorry, Antarctica.

3. Youth organizers in the United States have released the following list of demands, released on September 11: a Green New Deal, respect of Indigenous lands and sovereignty, environmental justice, protection and restoration of biodiversity, and implementation of sustainable agriculture.

4. Anyone unable to strike can support protestors with by joining a “digital strike.” The movement acknowledges that many people don’t have the means or opportunity to walk out of work or school in the middle of the day. If you want to support the cause, but need to stay put, you can let your voice be heard online! Go HERE for all of the tools you need to protest on social media, like the #ClimateStrike profile pic overlay, details about what hashtags to use, and official graphics to post on social media.

5. NYC is supporting striking students by excusing their school absences. The 1.1 millions students of New York City are allowed to skip school to attend the Climate Strike with no consequences, Mayor Bill de Blasio and the NYC Department of Education announced on September 12. Well, if they have parental permission. De Blasio, a 2020 Democratic presidential candidate, tweeted, “We have ten years to save the planet. TEN YEARS. Today’s leaders are making decisions for our environment that our kids will have to live with. New York City stands with our young people. They’re our conscience. We support the 9/20 #ClimateStrike.” He followed by tweeting that NYC schools will be sharing guidance and resources with students and parents on how to participate in the protests. For parents/guardians to give permission for their student to be absent, they’ll have to do so “in the same manner they normally would.”