Things fell apart for Chris Bukowski and Katie Morton after their ‘Bachelor in Paradise’ engagement, and they had a lot to hash out during an emotional conversation at the reunion show.

Katie Morton and Chris Bukowski are engaged after the finale of Bachelor in Paradise! Chris popped the question after meeting Katie on the beach for the final rose ceremony, and she was nearly in tears as she accepted. The ring Chris gave his future wife features a diamond band, with one large diamond set in the middle. It fit perfectly on Katie’s finger, and she couldn’t take her eyes off of it once it was on her hand. The proposal came after a lot of second guessing on Chris’s part, but he eventually realized that Katie is the only one who he wants to be with!

“First of all, I feel like it’s been hard. The way we got here is insane. Just looking back on how this all began and going through so many battles, a lot of uncertainty and a lot of highs that are unexplainable,” Chris said. “I can’t even explain to you how I feel right now because I’ve never felt it before. I just feel like I’m the luckiest man in the world right now. You make me feel calm, comfortable, you make me feel like myself. I feel like I didn’t even know what that was sometimes. I’m so happy to be standing here with you. Everything I’ve been looking for, fighting for and searching for aimlessly is in this moment right here. I can’t imagine a second without you. I see you in my tomorrow, I see you in my forever. I want to make this the best moment of our life. Katie, will you marry me?” Of course, Katie accepted with tears streaming down her face!

Unfortunately, when Katie appeared on the reunion show, she admitted that things weren’t going great in the relationship, and she even showed up without her ring on. “Life isn’t perfect,” she said. “Communication’s been hard. I’m exhausted. We’re still engaged. I just put in so much effort every day, and I love him so much, but I put in so much that my tank empties. When I’m not getting it filled, I break down.” She eventually started breaking down in tears, and added, “I only got halfway answers until the engagement. I fell in love with potential that may never come to fruition, but I’m just praying it does.” She admitted that she didn’t want to end things, but had a lot to discuss with Chris, who was then brought onstage to hash things out. 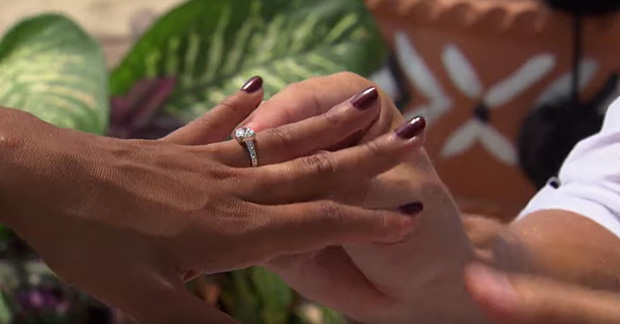 Chris admitted that things in the relationship were “rocky,” and Katie reiterated the concerns she brought up earlier. “I appreciate the way you are and how much you care,” Chris said. “It’s usually you supporting me. I want to give you all of that back. You deserve that. I guess I’m just a little bit slower when it comes to that when you are.”

Katie was understanding about Chris being at a slower speed than her, but explained that she just doesn’t feel special and loved by him sometimes. “It’s just a guessing game for me and I hate guessing,” she told him. “I’m exhausted.” Chris assured Katie that he wants to give her all the things she’s asking of him. “I don’t want you to feel insecure,” he insisted. “You’re amazing, you’re beautiful and I want you to know that. I’m sorry that you feel that way. I’m definitely capable of being that man, but if you don’t believe me, I don’t want you to be in a position…”

At that point, Katie cut him off and assured him that she did believe he could be the man she wants him to be…because she’s seen glimpses of him being that man before. However, at this point, the ‘glimpses’ weren’t enough anymore. “I feel the best when I’m with you,” Chris told her. “My family loves you. My friends love you. I love you. I think there’s so many better days ahead of us. I want to see those days. I really do. I want to be in this. I absolutely do.” Katie agreed to put her ring back on, and they left as a united front, hoping to patch things up even further off-camera.

However, backstage, Chris admitted to feeling ‘blindsided’ by Katie calling him out on the show. She got frustrated because they’ve had this conversation so many times before, so she didn’t understand how it could have been a blindside. They stormed off in different directions, and it’s unclear where they stand.

Chris and Katie’s relationship began at the very beginning of Paradise, and they quickly emerged as one of the season’s strongest couples. However, Chris has major history in Bachelor Nation, as this season of BIP was his sixth appearance on one of the shows in the franchise — he appeared on seasons eight and ten of The Bachelorette, season three of Bachelor Pad and seasons one and two of Bachelor in Paradise. He insisted he was retiring after that last appearance, but he came back four years later and finally found love!

Meanwhile, Katie is much newer to the franchise, as she first showed up during Colton Underwood’s season of The Bachelor. She made it all the way to week six before being eliminated. Luckily, Chris was there to turn it all around for her!