Dylan Barbour and Hannah Godwin are going strong after his proposal on the ‘Bachelor in Paradise’ finale, and they confirmed that she’s moving to Cali for him!

Introducing America’s newest Sweethearts — Hannah Godwin and Dylan Barbour! These two have been together since the very beginning of Bachelor in Paradise, and they proved that they’re in it for the long haul by getting engaged during the season six finale on Sept. 17. After saying ‘I love you’ during last week’s episode, Hannah and Dylan spent the night in the fantasy suite before his finale proposal. Dylan popped the question with a gorgeous ring, which featured on big diamond set on a plain band. The massive rock had a halo around it, and it looked stunning on Hannah’s dainty finger.

Before proposing, Dylan was nervous that Hannah wouldn’t be ready to accept a proposal. She also admitted in her confessional that she was working through some “obstacles” and wanted to make sure she figured out the best decision before accepting a proposal. After hearing Dylan express how much he loved her, Hannah opened up about what was holding her back

“I walked onto this beach and I truly didn’t know that I could deserve somebody as great as you,” Hannah said. “You made my Paradise so special just by being you and following your heart. I’m so ready to make you my priority. But the biggest thing with that is that I’ve also been burned a little bit in the past — my last relationship crumbled and it crumbled part of me, too. I’m terrified and scared about that happening again.”

Dylan responded with an offer that Hannah could not refuse. “I know how important your family is to you and it is one of a million reasons why I love you,” he gushed. “I’m willing to get on a plane with you tonight to Alabama and meet them. I cannot wait to meet them. But I also can’t wait to take the next step with you and start our life together. You’ve shown me a love I never thought existed and I can’t leae here without showing you how much I love you. So, do you trust me?”

With a huge smile on her face, Hannah told Dylan that she trusted him “1 million percent,” which was all he needed to hear to get down on one knee and pop the question. Of course, she accepted. 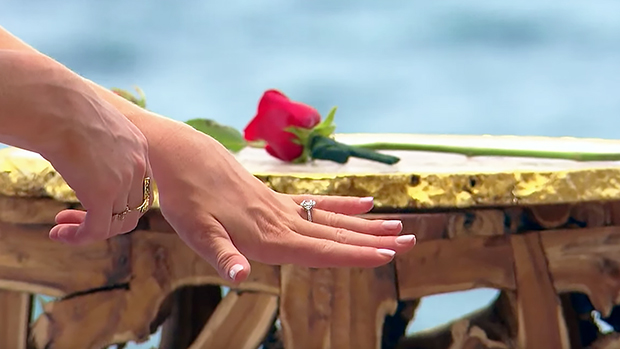 At the reunion show, Hannah and Dylan revealed they are still together and happily engaged. “He’s my person,” Hannah gushed. “I have a different kind of love for him that I ever knew existed and that’s really special.” As for an update on where they’re at? Dylan revealed, ‘We’re just enjoying every day together. I think the big update is that Hannah’s moving to California so we’ll be a little closer to each other!” No, they’re not moving in together just yet, but they’ll no longer be a plane ride apart!

Hannah and Dylan started this season on a bit of a roller coaster. He was interested in her — and only her! — from day one, and pursued her immediately. However, she was hesitant to go all-in on their relationship, as she was also exploring something with Blake Horstmann, who she had spent time with before filming started. It wound up creating a love triangle between the three of them, but Hannah eventually chose Dylan, and they were hot and heavy ever since. Now, they’re gearing up for their future together!