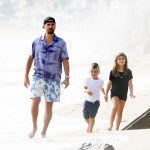 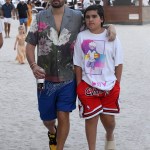 Corey Gamble started a brutal war of words with Scott Disick where he said he’d ‘whip’ The Lord’s daughter Penelope, 7, if she scratched him, then doubled down and said he’d spank her.

Scott Disick isn’t about to let anyone use physical discipline on his children. But Kris Jenner‘s longtime boyfriend Corey Gamble, 38, said he’d go there during a fight on the upcoming episode of Keeping Up With The Kardashians on Sept. 22. The two men are seated across the table from each other at a dinner that included Kris, 63, the mother of Scott’s three kids Kourtney Kardashian, 40, and Kim Kardashian, 38.  In a new preview clip Kourt says “I am shocked about last night,”and the action cuts to the heated argument.

It’s unclear how the drama began, but Corey yells across the table to 36-year-old Scott, “If P scratch me, I’m whipping her a**” referring to Scott’s seven-year-old daughter Penelope. A shaken and wide-eyed Scott responds, “My daughter?” then Corey reiterates he’d physically punish Scott’s child, shouting, “Give her a spanking, for sure.”

“My little daughter?!” Scott yells in shock and Corey fires back “Whippin’ is that discipline!” while Scott thinks he has no right to do that to any kid, screaming,“Don’t ever talk about a child like that!” That just gets Corey even more pissed, heatedly telling Scott “Motherf**er what you talking about?” Scott has had enough at this point, telling him “Get the f**k outta here!” while Kim, and Kourtney look on in stunned silence and Kris just stares down at her plate of food, keeping out of the fracas.

Next Sunday, a family dinner takes a turn for the worst. This new #KUWTK can’t be missed. pic.twitter.com/gUtnl8iM2K

Kris and Corey have been dating since mid 2014, and he’s usually not featured prominently on KUWTK, so it’s surprising that Kris would be okay with having her boyfriend shown in the negative light of being willing to “whip” a child. She made it clear he’s “part of the family” during a May 26 episode of the show where he attended what Khloe Kardashian, 35 and BFF Malika Haqq, 36, thought was a Palm Springs “girls weekend” with Kris. That put Khloe in a mood and she was rude to him over dinner.

“I think it’s really important for Khloe to understand that she really needs to get on my bandwagon because Corey is a part of the family. He isn’t going anywhere and she needs to be nice,” Kris said in a confessional. She later told Khloe “Corey is really taking care of me like no one ever has in my entire life,” and Khloe ended up apologizing to her mom.