Lala Kent is setting the record straight after 50 Cent accused her of drug use amidst their controversial feud. The ‘Vanderpump Rules’ star shared an emotional message about cyber bullying, where she defended her sobriety over the weekend.

Lala Kent is hitting back after 50 Cent accused her of using drugs in a series of posts on Instagram over the weekend. After the Vanderpump Rules star, 29, began receiving messages from those who were concerned she had broken her sobriety, Lala said she felt it was important to address the accusations. “… I’m only going to address this once,” she began in a since expired note (seen below) on Instagram Stories.

“My sobriety is something I’m proud of and work on [every day]. I’ve never done cocaine nor were any other substances, other than alcohol, involved in my decision to get sober. I pride myself on being open and honest about everything in my life, hopefully inspiring others and letting them know they are not alone,” Lala wrote, explaining, “The past couple of days I’ve been slammed to say the very least. People have asked me how I’m maintaining keeping my head up… To me it’s simple—I know Real Life from the illusion of social media. I know what it feels like to have your world crumble. Getting a phone call from your brother saying your dad has passed away…that is earth-shattering. Being called names and being falsely accused of things…that is far from earth-shattering.”

Lala then added, “My mindset is something I’m grateful for — however I can’t help but think about how many people are taking their own lives, daily, due to cyberbullying. It is imperative that I tell you, you are not by yourself. I see you. I stand by you. I’m on your team. You are loved and make a difference in this world.” 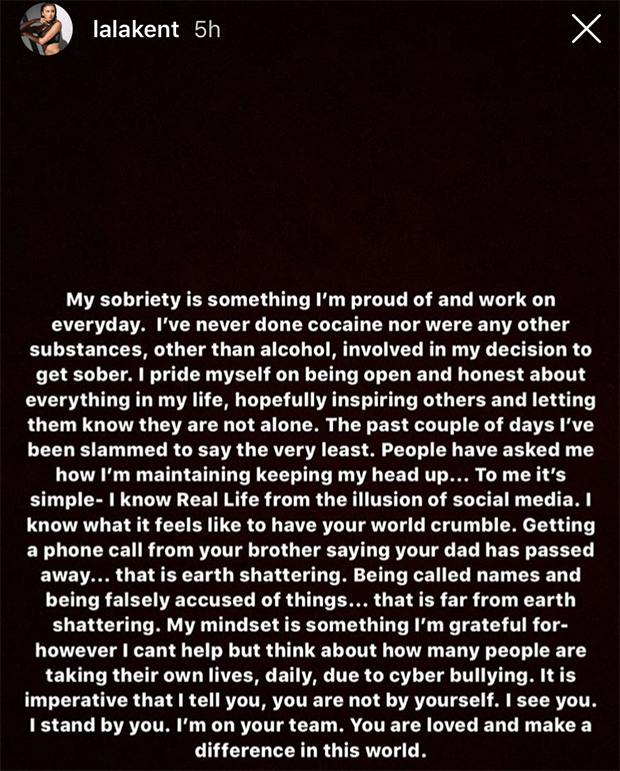 Lala and 50’s feud went public back in April, after the Power star, 44, accused her fiance, Randall Emmett, 48, of owing him money. The two had been involved in production projects together, and 50 claimed he loaned Randall money and that the producer never paid his near $1 million debt. At the time, the rapper took the issue to social media, where he shared the back story, along with alleged text messages between the two discussing Randall’s debt.

Ultimately, 50 Cent ended up getting paid soon after he aired out the feud online, he said in a since-deleted Instagram post. 50 shared a text exchange with Randall confirming he “just got the wire.” The rapper captioned the post, “I got my money, so I have no problem with Randall Emmett, in fact I’m wishing him and his family a very blessed day. Positive vibes now guys.”

Just when the dust seemed to settle, Lala stirred the pot during an appearance on Watch What Happens Live with Andy Cohen on September 12. When she was asked where she stands with 50 (aka, “Fofty”), now that Randall’s debt has been paid, Lala appeared to gloat over the fact that she “dinged” 50’s ego during the feud. She even claimed she had “receipts” to prove it. And, that’s when 50 fired back on social media.

The “Candy Shop” crooner then took to Instagram to accuse Lala of drug and alcohol abuse. He also shared a photo of Lala from a separate WWHL appearance during which she had opened up about her sobriety.

In other posts, 50 mocked her relationship with Randall, and posted past clips of Lala talking about their quickie romance on Vanderpump Rules. The rapper even went as far as to share a post about Randall’s ex-wife Ambyr Childers in which he referred to her as “the best thing that happen to your dumb ass.”