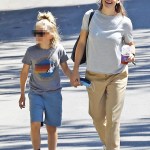 Exes Ben Affleck and Jennifer Garner were spotted enjoying some time with their kids on a sunny day in Los Angeles.

Ben Affleck, 47, and Jennifer Garner, 47, may no longer be married — but they’ve got the co-parenting thing down! The former couple, who filed for divorce in 2017 after tying the knot in 2005, were spotted enjoying a day out at 10-year-old daughter Seraphina‘s soccer game on Saturday, September 14. Their middle child was rocking her soccer uniform and a practical ponytail as she arrived to the field holding  dad Ben’s hand. 7-year-old Samuel was also seen in the photos, as he cheered on his big sister while sitting on Ben’s lap but Ben and Jen’s oldest daughter, Violet, 13, didn’t appear to make the family outing.

The soccer game took place in the ritzy Pacific Palisades neighborhood of Los Angeles, which is known for its stunning scenery, pricey real-estate and close proximity to Malibu and Brentwood. Ben and Jen have made a habit of re-uniting for their kids, and were seen shading themselves with umbrellas at Serphina’s practice in the Brentwood neighborhood just last weekend, as well as hanging out at Samuel’s swim class.

Ben was casually dressed for the warm 86 degree weather, sporting a dark chambray button-down, olive green pants and brown shoes. Meanwhile, Jenn wore a laid-back gray t-shirt, breezy striped linen pants, comfy looking sneakers and a bold pair of black sunglasses. She stayed cool with an iced drink from Brentwood Country Mart’s Farmshop, and appeared to be getting some work in as she clutched onto a black leather notebook, her phone and a bright red wallet.

Their same green umbrellas from last week made an appearance, as Ben held one over himself and Samuel while sitting in a fold-up chair. Mom-of-three Jen was prepared for an afternoon on the field, as she opened an insulated zip-up cooler with drinks and snacks while chatting up another mom on the field.

Though the couple only finalized their divorce in October 2018, they’ve remained amicable for their three kids, and are often seen enjoying each other’s company while out and about. As we’ve previously reported, the couple took a “long road” to reach the point they’re at now — but they seem to be in a happy and healthy place while they continue to co-parent their kids.