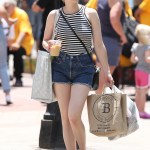 Another ‘Seberg’ screening, and another blazer and short shorts ensemble for the film’s star, Kristen Stewart! This time, the actress’ outfit was made entirely of tweed as she stepped out for the tribute event at the Deauville American Film Festival.

Kristen Stewart, 29, wore the favorite fabric of posh Parisians: tweed! And appropriately so, since she was attending France’s Deauville American Film Festival on Sept. 13, where she was awarded the film festival’s prestigious Talent Award. The actress stepped out onto the red carpet in a checked white blazer in the textured material, with tweed black shorts from Chanel to match. They fell into the short shorts category, and Kristen highlighted her lean legs even more with a pair of white pointed heels with thick black ankle straps. Kristen didn’t stray too far from her trademark punk image, since she wore a layering of silver chains affixed with a Louis Vuitton lock and key.

Kristen also attended a screening of her new film, Seberg, at the film festival. In the biopic, Kristen plays the leading role of Jean Seberg, and the location of this event was important — Jean was the darling of French New Wave cinema! The film also stars Anthony Mackie (Avengers trilogy), Margaret Qualley (Once Upon a Time In Hollywood) and Jack O’Connell (Skins).

Kristen has flung herself into the film festival circuit to promote Seberg! She wore a similar outfit for an appearance at the Toronto International Film Festival, where she was seen in a black blazer — that again flashed a hint of her midsection — and matching short shorts in early September. For the movie’s world premiere at Venice International Film Festival on Aug. 30, Kristen wore another Chanel piece — a shimmery dress layered with lace, from the designer’s Fall-Winter 2019/20 Haute Couture collection. It’s no surprise to see Kristen in an abundance of Chanel pieces, since she has been a brand ambassador for the label since 2013!

Kristen has been diversifying her IMDb as of late. Although she has opted for indie productions in recent years, she’s starring in two major pictures: the remake of Charlie’s Angels, premiering in Nov. 2019, and the ocean monster thriller Underwater, premiering in Jan. 2020.