Cardi B turned up the heat at Bankers Life Fieldhouse in Indianapolis on Wednesday night! The “Press” rapper, 26, looked fierce in a full-on red leather outfit onstage at the postponed concert that was initially scheduled in July. Cardi turned up in a belted corset with a caged bustier top and a high-neck, as well as matching shorts. Her white fishnet stockings were tucked into her shiny leather boots as she sported long blue nails and medium-length straight black hair.

The Grammy-winning rapper treated the packed crowd to a sultry twerk fest, which had fans screaming as they rapped along to her hits, according to the local site, Indy Star. At one point during the night, Cardi paused her set to apologize to Indiana fans for postponing the show. Back in July, Cardi had to abruptly cancel the initial summer date due to an anonymous threat of violence just less than an hour before showtime. “I would have performed,” she quipped, “if you wanted to die.”

After performing hits including, “Money Bag” from her No. 1 debut album, Invasion of Privacy, Cardi put on a rendition of her song, “Lick”, which features husband Offset. He was not present at the show. Following “Lick”, the site said Cardi paused her set once again to hilariously reference her fiery leather outfit. “I got asthma,” she said, to which her DJ replied, “But you look beautiful.” Yet, Cardi still questioned her decision to rock a corset that night. “I got asthma,” she repeated. 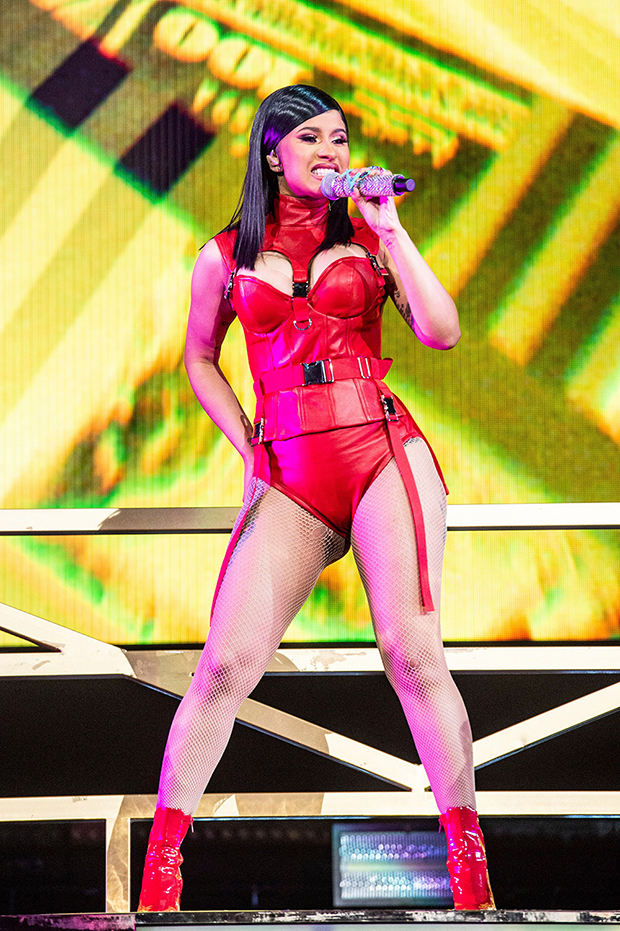 Cardi B performs in a red leather corset and shorts at Bankers Life Fieldhouse in Indianapolis on Wednesday, September 11, 2019. (Photo credit: Amy Harris/Invision/AP/Shutterstock)

Cardi’s sizzling Indy show fell on the same week as the release of her on-screen debut in the stripper-inspired film, Hustlers. The rap sensation stars alongside an A-list cast including, Jennifer Lopez, Keke Palmer, Lili Reinhart, Lizzo and Constance Wu.

Hustlers is already said to be a hit at the box office, as rave reviews continue to pour in from film critics who’ve vowed that Cardi shines on-screen. In part of its review, The Hollywood Reporter writes that “it’s a delight to see Cardi B and Lizzo play variations on their public and artistic personas.” Hustlers currently holds a 95% rating on Rotten Tomatoes based on nearly two dozen reviews. The film is in theaters now.