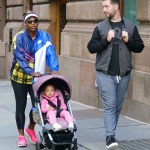 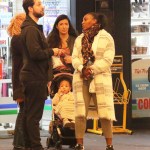 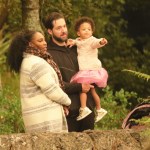 Serena Williams and Alexis Ohanian hit the red carpet together 2 days after her U.S. Open upset to 19-year-old Bianca Andreescu. The couple cleaned up nice for a date night at the premiere of ‘The Game Changers’ on Sept. 9!

Serena Williams and husband Alexis Ohanian had a sweet night out at the New York City premiere of The Game Changers on September 9. The tennis legend stunned in a satin slip dress with a v-neck and yellow snakeskin pumps. Meanwhile, the Reddit co-founder looked dapper in a tie-less dark suit.

Serena, who’s been in town for the U.S. Open and her upcoming New York Fashion Week show, let her blonde hair down with voluminous curls. She wore minimal makeup and accessories, as her fit physique was on display in her pale grey gown. Not to mention, Serena had her hubby as her main accessory on the red carpet.

Serena and Alexis made a date night out of the red carpet event for the documentary’s premiere. The couple was without their 2-year-old daughter, Alexis Olympia Ohanian Jr. Nonetheless, their baby girl couldn’t have been too far from her parents since she is with them on their east coast trip.

Serena and Alexis’ red carpet appearance came just one night before her S by Serena Williams Fashion Show, which is set to take place on Tuesday, September 10. She was also the guest of honor at New York Fashion Week’s The Shows, The Talk’s Breakfast of Champions on Monday, September 9, ahead of The Game Changers premiere.