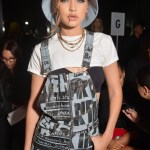 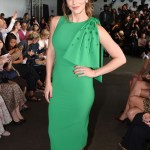 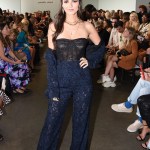 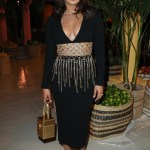 Miley Cyrus popped open more than one button at the Tom Ford NYFW show on Sept. 9, and Kaitlynn Carter was a fan. ‘The Hills: New Beginnings’ star even left a flirty emoji on Miley’s Instagram page!

First comes a viral kissing photo, next comes moving in together, and then comes Instagram flirting! Although a relationship hasn’t been confirmed, Miley Cyrus, 26, and Kaitlynn Carter, 31, are checking off all the stepping stones of a standard celebrity romance — which included hyping up your beau on social media! Miley shared her rocker-chic look from the Tom Ford New York Fashion Week show to Instagram on Sept. 9, which included a sexily unbuttoned shirt and a hint of side boob. Kaitlyn was here for it. “Dear god 🤤,” The Hills: New Beginnings star commented in response to the pop star’s look, which also featured a velvet duster coat, satin trousers and a giant fuzzy bucket hat.

Kaitlynn’s online affection follows on the heels of affection we’ve witnessed IRL. The fashionista held hands with Miley as they arrived at the Columbia Records VMA after-party for the MTV Music Video Awards on Aug. 26, the same award show where Kaitlynn was seen caressing Miley’s head. They were even seen packing on the PDA at Soho House in Los Angeles on Sept. 1! “Miley was all over Kaitlynn and it didn’t bother her mom [Tish Cyrus], herself or Kaitlynn while they were there,” a source EXCLUSIVELY told HollywoodLife. “It felt extremely normal. They were kissing and holding hands and always touching the entire time they were there.”

Of course, there were those iconic photos of Miley and Kaitlynn kissing and cuddling in Italy that surfaced on Aug. 10, which started it all. Both ladies announced their splits from their husbands in August (Miley was married to Liam Hemsworth, 29, and Kaitlynn was with Brody Jenner, 36). Despite the fresh breakups, Miley and Kaitlynn reportedly just took a major step together.

Much bigger than an Instagram comment, however, was Kaitlynn and Miley’s reported decision to move in together! “Miley and Kaitlynn are spending what seems like every moment with one another, so much so, that they’ve moved in together in the Hidden Hills area in the last week,” an insider EXCLUSIVELY told HollywoodLife at the beginning of September. “You never spot one without the other at the home. The couple was seen moving into a home last week in the same gated community as the Kardashians, The Weekend and Drake who they now live very close to.”