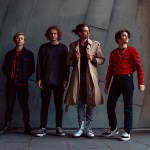 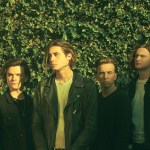 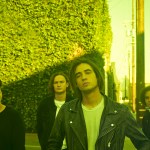 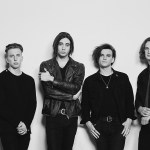 The Faim has built a dedicated following — one that’s eager for their debut album, ‘State Of Mind.’ The band EXCLUSIVELY tells us what went into making the record, plus the advice Fall Out Boy’s Pete Wentz gave them that they’ll never forget!

Since their first performance at bassist/keyboardist Stephen Beerkens’ 18th birthday party, The Faim has been winning over fans and building a buzz as the band to watch. The four-piece from Perth, Australia – lead singer Josh Raven, guitarist Samuel Tye, drummer Linden Marissen and Beerkens – released their debut ep, Summer Is A Curse, in 2018. Featuring singles “Saints of the Sinners” (co-written by Fall Out Boy’s Pete Wentz), “Midland Line” and the title track, the EP earned the band both commercial and critical success.

With a fanbase that knows the lyrics to their songs before they’re officially released, The Faim will drop State Of Mind, their debut album, on Sept. 13. Ahead of the album’s release, lead singer Josh Raven spoke EXCLUSIVELY with HollywoodLife about what we can expect, why their fans are so “passionate,” and that vital piece of advice Pete gave him.

HollywoodLife: What was the biggest difference in recording State of Mind compared to last year’s Summer Is A Curse?

Josh Raven: There were a variety of differences in recording State of Mind. Not only is it the larger amount of songs compared to an EP, but we also had to utilize every spare moment and every opportunity to record songs when/where we could among our intense schedule. Recording this album has been very much journey for us as individuals and as a band.

There are songs from 2016 and songs we finished writing straight after our 2019 U.S. tour in our hometown Perth. All of that aside, the biggest difference I can notice is the sheer attention to detail we’ve put into each song. We’ve utilized every aspect we’ve learned from our story so far and put every ounce of ourselves physically/mentally into this album. It truly has turned into not just a collection of songs, but an amalgamation of the stream of consciousness provoked by honest emotion, personal stories, and perspective. We couldn’t be prouder of what we’re putting out into the world.

Your sound has been compared to Fall Out Boy, and you worked with Pete Wentz on your debut EP. Did he give you any advice for your rock and roll journey?

There’s a sentence Pete said to us during our recording of “Saints of the Sinners,” a song from our EP, that will stick in my brain. He mentioned that “in the music industry today there is absolutely NO room for mediocracy.” This really stuck with us because he was completely right. Music today is accessible, consumed, and put into the world more often than any other generation. Streaming has opened doors for anyone in the world to have a sonic imprint. Which is great for artists, but it also creates a mindset of needing to be a definitive factor amongst so much material.

In a world that seems more divided than ever, “Humans,” the first single off of State of Mind, seems to stress unity and understanding. Did the chaos that’s currently going on in the world spark this song’s creation?

Definitely. I keep a keen eye on what goes on around, honestly at my own detriment sometimes. I tend to rack my brain with circumstances I can’t necessarily control but are extremely passionate about. Through my own experiences within relationships, life obstacles, and personal exploration, I believe that everyone in the world is the same. The only thing that separates us from another human being is our reactions to the environment around us, and the intricacies of life we face each day. Now more than ever, I feel speaking out about these sorts of issues is an important responsibility for anyone in a creative platform with people who are willing to listen.

Similarly, what was the motivation behind “Infamous”? The song almost depicts a Katniss/Peeta rebellious duo dynamic to its lyrics. Was there someone(s) in particular in mind when writing this song?

It definitely started out with a person in mind, but as the song came to light, there came a realization that this song had more of a universal connection than we intended. This song is always sung with a certain individual in mind, but I feel like the connection in this song lies in the fact that I think everyone has a person in mind while listening to “Infamous.” Not only does it provoke that sense of perspective, but performing it live I think it invites everyone into this collective understanding of the emotions that come with that connection you can have with that special someone or something.

Your fans are very dedicated. I read that they would sing along to songs that haven’t been released yet. What do you think draws them to your music and connect with The Faim on such a deep, passionate level?

I’m not too sure, but I feel that people resonate with our honesty as musicians and the way we carry ourselves in life. We’re human beings who have a great passion for music, and we don’t pretend to be anything else. It’s humbling and rewarding to see people all over the world find a perspective, safety, and interest in our music. When you take the armor off and put so much identity/personal experience into something creative, sometimes it can be a little daunting, but the positive reactions we’ve been receiving are truly comforting.

The Faim claims Fall Out Boy, Panic! at the Disco, and Metallica as influences. Are you guys blasting a lot of metal on tour? What are you guys listening to this summer?

We blast a very diverse amount of music on tour. Sonic perspective is such an important fundamental in finding inspiration and gaining insight. From metal to R&B and rock to pop, you can find things to love in any kind of music. Some artists and bands we’ve been listening to recently are Nothing But Thieves, Anderson Paak, Slipknot, and The 1975.

State Of Mind is available on Friday, Sept. 13.