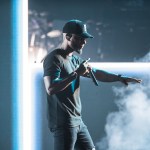 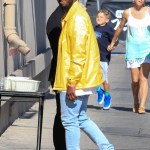 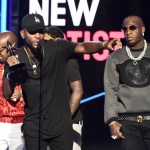 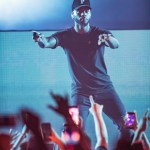 Bryson Tiller and girlfriend, Kendra Bailey are expecting a baby girl together! The couple announced the good news with a cute debut of her baby bump on Sept. 3. And, while fans are thrilled, they’re also concerned that the singer will delay new music.

Congratulations are in order for Bryson Tiller and Kendra Bailey! The singer and his model girlfriend are expecting a baby girl, they announced in a post on Instagram, September 3. “Been sitting here trying to come up with one of those long deep captions but honestly I’m so bad at that. All I know is we are super excited for our little girl to get here,” Kendra captioned a series of Instagram photos debuting her baby bump during a celebration with Bryson, friends and family. The pictures show the couple with their loved ones at the celebration, which was decorated with pink and white balloons.

“Cant wait for my lil cocoa bean,” the “Don’t” rapper commented on the photos, adding a baby emoji. Bryson also re-shared Kendra’s post to his Instagram Stories and wrote, “Man oh man I can’t wait to meet this baby.” In a solo shot (via IG Stories) of himself during the baby bash, he shared, “Fatherhood is so important to me, more than anything else. Thank you for all of the positive messages guys, it truly means the world. Wow, father of 2, gotta go twice as hard now.” Bryson also has a daughter, Harley Loraine Tiller, born in 2013, from a previous relationship.

Fans of the singer also took to social media to gush over the news and send their congratulatory messages. However, some fans took the news as a sign that Bryson will slow down his plans for future music. “We made Bryson Tiller rich and he just said thanks and didn’t make no more music,” one fan tweeted. “WOOWWW Bryson Tiller really thought it was okay to have another baby before dropping another album,” another wrote on Twitter. “Bryson Tiller is a family man now,” one fan said, adding, “That album never dropping.”

☀️💕 Been sitting here trying to come up with one of those long deep captions but honestly I'm so bad at that. All I know is we are super excited for our little girl to get here💕 🧿

Bryson, who is known for hits such as “Don’t” and his feature on DJ Khaled‘s “Wild Thoughts” has kept a relatively low profile throughout 2019. He returned to the music scene with a new track, “Blame” in July. It’s unclear if the song was a single, or part of a forthcoming album.

Congratulations to the happy couple! We’re super excited to see their baby girls too!