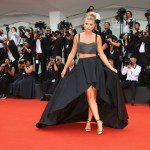 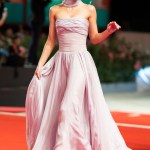 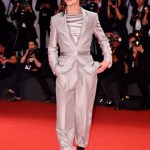 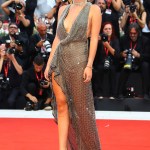 When Kristen Stewart does glam, she goes all out. She wore a long pink and silver glittering gown for the ‘Seberg’ premiere at the Venice Film Festival.

Va va VOOM! Kristen Stewart went old Hollywood bombshell meets futuristic glam with an incredible dress at the 2019 Venice Film Festival. She walked the red carpet on Aug. 30 for the premiere of her new film Seberg and her gown completely glittered. The pink fabric featured patches of shiny silver petal patterns and since it was long-sleeved with a full skirt, she lit up the night. Kristen, 29, has been a brand ambassador for Chanel since 2013 so the gown is likely from the late Karl Lagerfeld‘s design house.

Kristen went pure punk with her hair and make up. She wore her short dark brown locks with platinum tips in a long side-part so her hair swept over her head. She matched her eye shadow to her rose-colored gown with large swaths going out from the corners across to her hairline. K-Stew also went heavy on the dark liner so her eyes really stood out. Her rose-colored blush and lip went perfectly with the rest of her look.

The biopic loosely based on the latter years of 1960’s film star Jean Seberg has left critics at the Venice Film Festival divided, but nearly all have praised Kristen’s performance as one of the best of her career. It’s definitely a far cry from her Twilight days, as Kristen plays the actress who became a sensation in the 1960 French film Breathless but who would later be subjected to J. Edgar Hoover’s FBI surveillance program COINTELPRO for her support of the Black Panther movement. She died at age 40 from a probable suicide.

Kristen’s next project is a complete 180, as in her next film Underwater she plays a researcher in a module at the bottom of the ocean who has to fight off a sea monster. That movie is due in theaters on Jan. 10, 2020.