Farrah Abraham’s daughter Sophia is stealing the spotlight at the Venice Film Festival! The mother-daughter duo look stunning in lace dresses in new photos from the annual event.

Farrah Abraham is making a splash in Italy at the 2019 Venice Film Festival! — And, her daughter, Sophia Laurent is already a red carpet pro. The Teen Mom alum, 28, and her daughter, 10, stepped out on Thursday in lace dresses, as seen in new photos of the two holding hands and smiling together.

Farrah stunned in a plunging, white dress, while Sophia looked pretty in a yellow dress with a belted bow. The mommy-daughter duo both wore their brunette hair down as they made their way through the 76th annual festival. Farrah has been documenting her trip on social media since she touched down in Italy earlier this week.

The outing came after the reality star made her red carpet debut at the festival when she attended the Ad Astra premiere on August 29. Farrah turned heads in a revealing floral gown, which she later suffered a wardrobe malfunction in. Her Christophe Guillarme dress, which featured a risky thigh-high slit, showed off much more than she had bargained for. As Farrah struck a sultry pose, where she stuck her leg out of the slit, she revealed that she had gone commando to the bevy of paparazzi on the red carpet. 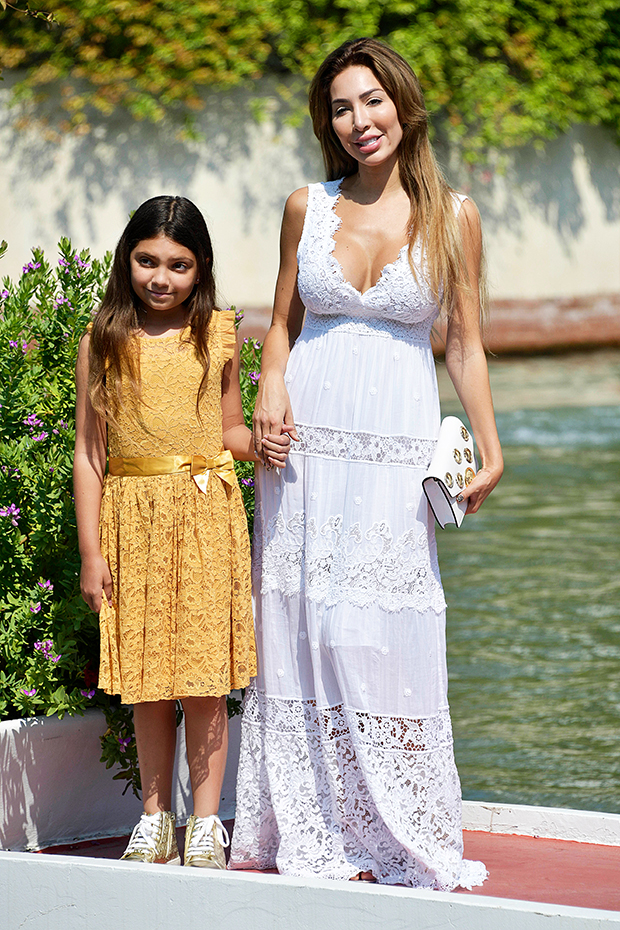 Farrah, who isn’t one to shy away from any controversy, didn’t seem to be bothered by the fashion mishap. She went on to share screenshots of the headlines she and her unmentionables made on her Instagram Story, and even gave a shout out to the French designer who made her gown. Farrah also tagged her jewelry brand, Kollectin, which launches on September 16.

The mother-of-one also shared a sweet message about her experience at the Ad Astra carpet and praised Brad Pitt‘s new film. “You’re going to love #adastra! Great movie for father’s & Sons, those who enjoy #nasa space and the purpose of living life to its fullest,” she captioned a photo of herself at the red carpet premiere. ‘As an actress, writer, producer , Director I enjoyed it! Might be best this festival 💯,” Farrah continued, before she teased her own upcoming project. “Can’t wait to release my feature film 🎬Coming from Docu – Reality TV on Teen Mom I was grateful to see & meet fans in Venice Italy!”