We thought guac costs extra?! Shawn Mendes shows off his super fit body as he gobbles down a healthy avocado — and celeb fans like John Mayer and Jesse Tyler Ferguson were eating it up!

Holy avocad-oh! Shawn Mendes, 21, is driving his followers crazy with his latest Instagram post! The sexy singer posted a candid snap of himself — shirtless, of course — as he enjoys an avocado right out of the skin. The photo, posted on Wednesday, August 28, gave fans a revealing look at Shawn’s chiseled torso, toned arms and — um — rock hard abs! The “Senorita” singer appears to be mid-chew, as he holds a spoon to his mouth and flashes the camera a candid, slightly surprised look. While avocados are totally delicious, they’re also considered a superfood due to their healthy fats and high levels of potassium. But, back to Shawn — did we mention his curly hair looks more luscious than ever? Naturally, he captioned the photo with the “🥑”  emoji — SEE THE PIC HERE!

Shawn’s 50 million followers were acting avo control when it came to the comments, including a few famous folks. “If you’re happy I’m happy,” John Mayer hilariously wrote. “Um…I’m here for the avocado,” Jesse Tyler Ferguson joked (sure, so are we Jesse!). One Republic’s Ryan Tedder shared, “Remember when I trained u to get those abs? Working?”, while super model Winnie Harlow hinted at the fat content in avocados, writing “🤢 avo straight?! W/e come on gains!!!! 💪🏽.” Influencer James Charles even got in on the action, saying “Wow a man with taste.” So far, the photo has racked nearly six million likes.

The singer is currently on the road for his massive 106-date concert tour, which hit the Wells Fargo Center in Philadelphia, PN  on Wednesday, August 28. While it’s unclear when or where the photo was taken, Shawn tagged his tour manager Cez Darke and photographer Josiah Vandien, who presumably took the fun photo. Both have been on the road with the Canadian pop star, sharing various photos and videos since the tour kicked off in Amsterdam back in March. 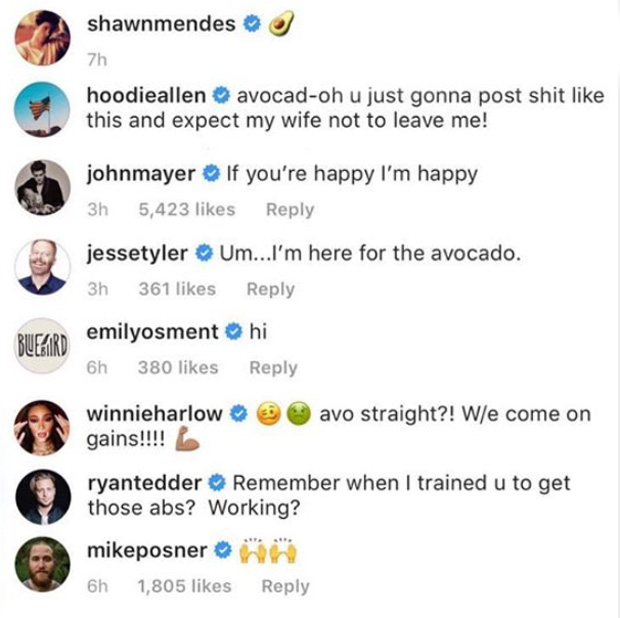 In addition to his tour, the Toronto-born star has been keeping busy, recently performing at the VMAs with his lady love Camila Cabello, 22, and taking home the award for Best Collaboration. Fans just can’t get enough of their steamy single “Senorita,” which just hit #1 on the Billboard Hot 100.