Katie Holmes, 40, and Suri Cruise, 13, are the ultimate mommy-daughter duo. The actress and her look-a-like daughter stepped out in New York City on Wednesday, where they were photographed after Katie picked up Suri from school. Despite the rainy weather, Katie still sported a pair of stunning neon green pumps with white pants and a grey top. Meanwhile, Suri was dressed more casually in bright pink sweats and a grey tee with sneakers.

The outing came just a little over a week after Katie and her longtime boyfriend, actor Jamie Foxx, 51, ended their six-year relationship. Although the couple never confirmed their whirlwind romance, they’d been linked together since 2013. News of their split came just a few days after Jamie was spotted holding hands with singer Sela Vave, 21, after the two left celeb hotspot, Bootsy Bellows nightclub in Los Angeles.

Although the pair looked like a couple, both Sela and Jamie were quick to deny the romance rumors. Sela, an upcoming music artist, shared a lengthy video on Instagram Live, where she explained that Jamie is mentoring her. The actor and producer then re-shared the video and corroborated Sela’s story, and added that she is one of the many young artists he’s taken under his wing within the music business. 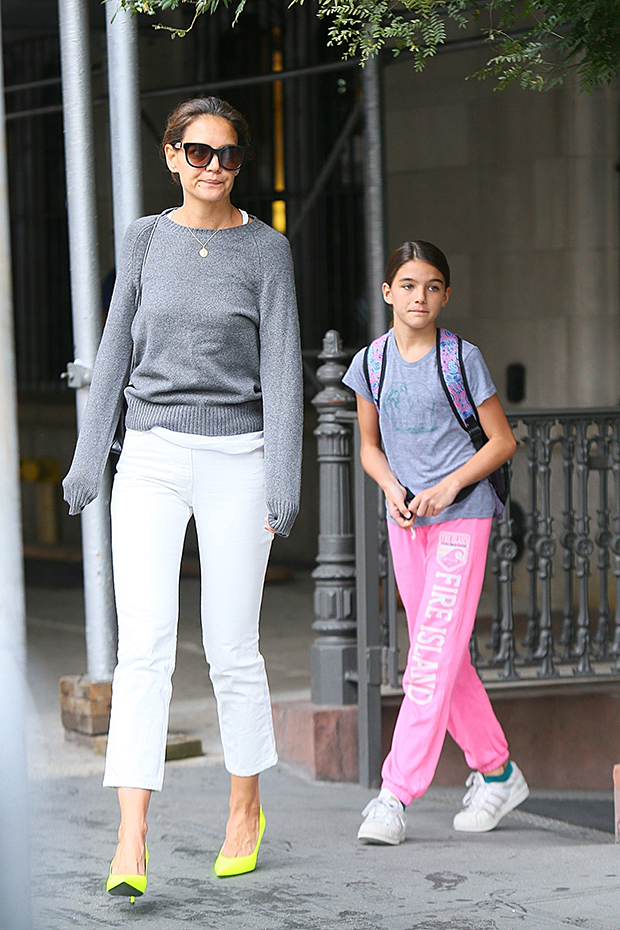 Katie Holmes and daughter Suri Cruise out and about in New York City on Wednesday, August 28, 2019. (Photo credit: Backgrid)

Meanwhile, a source told HollywoodLife that Katie and Jamie’s split was simply caused by the two stars wanting different things in life. “Jamie is the life of the party everywhere he goes. He always wants to be out and about and having fun,” a source close to the Beat Shazam host and Dawson’s Creek star said. “Katie is more reserved, and prefers to stay home instead of going to parties and events. Sure, she’ll go out to restaurants and enjoys nights out like that, but Jamie wants to be in the DJ in Vegas.”