Bradley Cooper, 44, is famous for morphing into any look for his movie roles. But whatever his latest project is has him growing out a very unfortunate mustache that has one of Hollywood’s sexiest hunks looking nothing like himself. The Instagram meme account tank.sinatra pointed out that, “Bradley Cooper is turning into Jeff Foxworthy,” showing a photo of the 44-year-old actor with his daughter Lea, 2, at Disneyland on Aug. 23 and on first blush he really does resemble a younger version of the 60-year-old stand up comedian and TV star.

Which is perfectly fine with Jeff’s wife. In the comments to tank’s post the Blue Collar TV host wrote “My wife is so happy right now!” Bradley also has his hair cut short on the sides to go along with the mustache, so the drastic change of appearance is most likely for an upcoming movie role. He’s scheduled to star in Guillermo del Toro‘s adaptation of the 1947 film Nightmare Alley where he plays a con-man. The other is titled Atlantic Wall, which according to imdb.com is about “An American soldier is trapped behind enemy lines on the eve of D-Day.”

However both of the films are still in pre-production and not set to begin filming in the near future. Maybe he’s just growing out his mustache to make sure he can capture the character’s look when cameras finally roll. Or possibly he’s decided he just really wants to look as unrecognizable as possible. 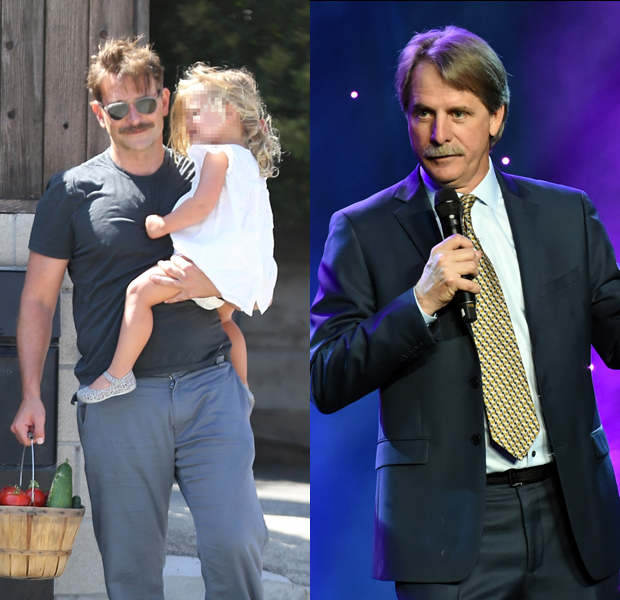 “I’m hoping that’s a shot from a movie he’s making…the whole look is tragic. No offense Jeff, it’s just you’re the only one who can pull it off,” a fan named John wrote in the comments. “”Jeff Foxworthy bio pic? Lol sure hope so,” a user named Jessica half-joked.  One fan who saw the photo of Bradley wrote, “Totally thought it WAS Jeff Foxworthy.”

Related: ‘Maestro’: What To Know About The Leonard Bernstein Biopic