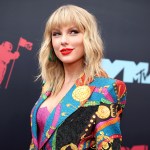 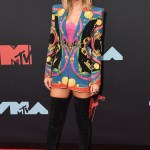 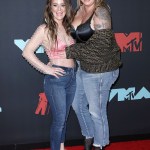 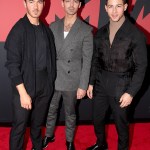 Supportive wife alert! Sophie Turner was by her husband, Joe Jonas’, side for his big night at the VMAs on Aug. 26, and she totally stole the show in her black and white dress.

Sophie Turner attended the 2019 Video Music Awards to support her husband, Joe Jonas, and she looked beyond amazing at the event. Sophie, 23, wore a long-sleeved black and white dress, which hugged her slender figure to perfection. She completed the look with a wide black belt, and wore her hair pushed to the side and styled in loose waves. She went for dark smokey eye makeup to add some edginess to the look, as well, and finished the look with strappy open-toed black heels on her feet. While the Dark Phoenix actress certainly looked red carpet ready, she let Joe and his brothers take the spotlight, skipping the carpet and heading straight into the venue.

Meanwhile, Joe, 30, looked quite handsome in his gray suit, and the newlyweds looked more in love than ever as they were spotted exiting sister-in-law Priyanka Chopra‘s Soho apartment to head to the show at the Prudential Center in Newark, NJ. The couple appeared to be getting ready at Priyanka’s swanky pad, where were spotted arriving in casual clothes earlier in the day. Sophie and Joe tied the knot in a Las Vegas ceremony back in May, then celebrated with a massive wedding with family and friends in France weeks later. They’ve been inseparable ever since — first, they took a romantic honeymoon in Italy, and since then, Sophie has been around to support Joe and his brothers on their massive 40-date Happiness Begins tour.

The Jonas Brothers performed at the VMAs, but from a remote location rather than on the actual VMA stage in Newark. The guys took over the Garden State’s iconic Stone Pony stage for their epic two-song performance, playing “Sucker” and “Only Human” off of their newest album, Happiness Begins. The guys were also nominated for Video of the Year, Artist of the Year, Song of the Year, Best Group, Best Pop Video and Song of the Summer at the event — taking home the moonman for “Sucker” in the Best Pop Video category.

While Sophie has been incredibly supportive throughout the Jonas Brothers 2019 reunion, he was also by her side as she promoted the final season of Game of Thrones and her film Dark Phoenix earlier this year. These two are relationship goals for LIFE!