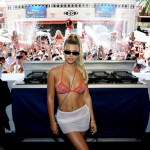 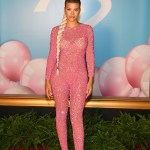 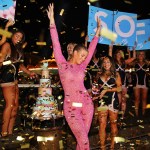 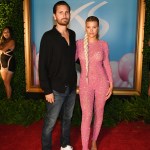 Kylie Jenner, 22, sure knows how to turn heads at birthday parties, even when it’s not her own! The Keeping Up with the Kardashians star joined her BFF Sofia Richie in Las Vegas to celebrate her 21st birthday on Aug. 24 and she looked nothing short of incredible! The brunette beauty stepped out to attend one of Sofia’s many bashes, this one at XS Nightclub at Wynn Las Vegas, while wearing a light pink latex sleeveless mini dress that perfectly hugged her curves. She walked alongside the birthday girl, who looked equally as stunning in a pink sequined catsuit style outfit, and her confidence was reflected in her cool and casual demeanor.

Kylie wasn’t the only one to be by Sofia’s side during the big day. Scott Disick, 36, also showed up to support his lady throughout the night, less than 24 hours after he gifted her with an eye-catching Aston Martin car estimated to cost a whopping $150,000. In addition to the night outing that revealed Sofia and Kylie’s pink outfits, they all had a good time in the day at the Encore Beach Club at Wynn Las Vegas, where Sofia wore an orange sequined bikini along with a sheer white mini skirt, as well as at dinner at Cipriani Las Vegas at Wynn Plaza.

Like Kylie being there for her special day, Sofia was there for Kylie’s a few weeks back when she and Scott joined the self-made billionaire for a birthday trip to Italy where they celebrated on a luxurious yacht off the coast of Italy. Kylie’s mom Kris Jenner, 63, as well as her boyfriend Travis Scott, 28, and one-year-old daughter Stormi also came along for the festivities and from the looks of the epic photos and videos they all posted to social media, they seemed to have a thrilling time.

Kylie also knows how to dress in the perfect style for every occasion so we love seeing her looks each time! Her latest dress was definitely a hit!