It had been pretty quiet between Chris Brown, 30, and on-again, off-again girlfriend Ammika Harris since June when pregnancy rumors surfaced. But the 25-year-old model has got the singer’s attention after posting an Instagram story on Aug. 21 where she wore a big green heart emoji over her own heart and tagged @chrisbrownofficial. Message received as he’s sending her love right back on her account via a new post she put up on Aug. 23.

“Sitting still while the world moves so fast around you. | my primary aura color is violet, secondary is crystal color,” Ammika wrote. The accompanying photo was of her seated in the same green patterned shirt dress outfit she wore to the PrettyLittleThing event in L.A. when she posted the IG story to Breezy. Chris must have got her message of the green heart about him because he responded in the comments with a violet heart emoji “💜” to Ammika that has fans going wild.

Under Chris’s comment, one fan wrote “@chrisbrownofficial I usually mind my business when it comes to peoples relationships but@ammikaaa is THE ONE FOR YOU!!” while another person added “@chrisbrownofficial i love to see this. 😍😘.” Chris is away on tour, something Ammika noted in her IG stories as right before she posted the pic with the heart devoted to Chris, she showed a photo of him onstage in concert. One fan noted, “@chrisbrownofficial someone missing his bae on tour❤️.” 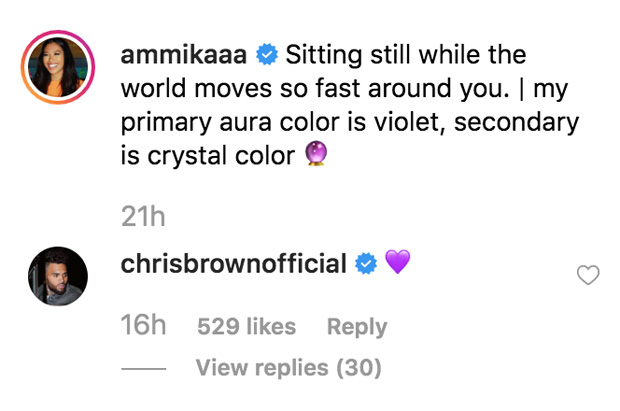 Sitting still while the world moves so fast around you. | my primary aura color is violet, secondary is crystal color 🔮

And then came the barrage of baby posts. Chris set off a flurry of pregnancy rumors in June when he wrote “my baby mama” underneath several of Ammika’s Instagram photos. While neither has confirmed a baby is on the way and Ammika has posted a couple of IG photos in August showing her with a flat tummy, fans are convinced Chris is going to be daddy for the second time. “@chrisbrownofficial love you💜💜💜💜💜💜💜💜💜💜💜. Is it true that you two are having a girl? Congrats handsome” one fan wrote while a very hopeful user named Claire wrote, “She really is pregnant. Wow. He really loves her.”