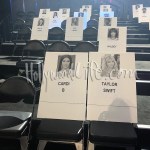 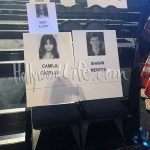 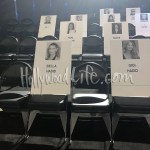 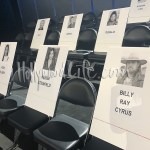 The 2019 MTV VMAs are upon us and HollywoodLife just got a sneak peek at the star-studded seating chart! From Taylor Swift, to Halsey, Camila Cabello, Lizzo, 2 Chainz and more — we’ve got the scoop on where your favorite stars will be sitting.

The 2019 MTV Video Music Awards are just days away! But, HollywoodLife had early access inside the Prudential Center in Newark, New Jersey on August 22 to check out where your favorite stars will be dancing the night away from their designated seats. This may come as no surprise to fans, but, new couple Camila Cabello and Shawn Mendes will sit next to each other at the show, as seen in the seat cards. — Check out more celebs and their seat-mates in our EXCLUSIVE attached gallery!

Taylor Swift, who leads the night’s nominations with 10, and Cardi B will sit next to each other. A few rows back, sisters, Gigi and Bella Hadid, along with their plus ones, will sit near one other. So, who will the models take to the awards show? While Bella’s guest remains a mystery, as she’s newly single following her split from The Weeknd, fans believe they know who Gigi’s guest will be. Gigi’s been spotted on multiple dates with former Bachelorette star, Tyler Cameron around New York City. And, the two models just returned from a romantic weekend trip to Lake George, New York. They have yet to make their red carpet debut as a couple, so all eyes will be on them at the VMAs.

Halsey will sit behind Taylor, while Lizzo, Alex Morgan and Bebe Rexha will all sit near each other in a row. Missy Elliot, who will be honored with this year’s Michael Jackson Video Vanguard Award, will sit behind Camila and Shawn. Hailee Steinfeld, Billy Ray Cyrus and Keke Palmer will all sit in the same row.

The annual awards show will air live from New Jersey on Monday, August 26 at 8 p.m. ET/PT. Comedian Sebastian Maniscalco will host the show, despite not know much about the music scene. Ahead of his MC gig, Sebastian told CBS This Morning‘s Gayle King that he accepted the job because of the “challenge” that comes with understanding music-loving “millennials.”

As mentioned, T-Swift leads the nominations, along with Ariana Grande. Both singers are tied with 10 nods each. Billie Eilish follows with the second-most nominations — nine. And, music’s newcomer Lil Nas X came in third with eight noms.

Jonas Brothers will do a remote performance, which marks their first at the VMAs in more than a decade. Meanwhile, T-Swift revealed on GMA on August 22 that she will open the show. Other stars who will take the stage for highly anticipated performances include: Camila Cabello with Shawn Mendes, J Balvin, Lil Nas X, Lizzo, Rosalía, Bad Bunny, A$AP Ferg, Big Sean, H.E.R., Normani and Ozuna, and Missy Elliott.