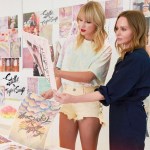 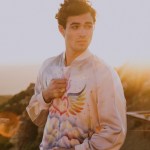 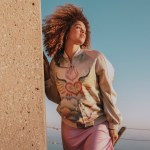 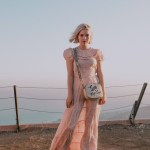 Taylor Swift’s ‘Lover’ album now has an accompanying designer clothing line, thanks to the help of the iconic Stella McCartney! Two standout items will be sold in Stella’s London and NYC stores for a limited time.

Cotton candy clouds, graffiti font, hearts with wings, song lyrics, cats and more are all a part of Taylor Swift’s Lover-inspired clothing collaboration with her good friend, designer Stella McCartney, 47! After weeks of waiting, the pop star finally gave fans their first-ever look at the pieces, ranging from T-shirts to hoodies, in a dreamy lookbook on her website on Aug. 20. Two of these pieces will be sold as luxury retail in Stella’s New York City and London stores, in addition to Tay’s pop-up shop in NYC: a $1,995 bomber jacket and a $795 handbag, according to the designer’s press release. The rest of the line will also be sold at Taylor’s “The Lover Experience” pop-up shop between Aug. 23-25. Yes, Aug. 23, as in the same day Taylor’s new album drops! Prices for the other pieces have yet to be announced, but more details are on the way.

“#StellaxTaylorSwift is coming soon 💘 It’s been SO much fun to work/dream up cute stuff with my friend @stellamccartney to create a line inspired by my new album Lover. Can’t wait to show you what we’ve been working on and tell you more about the pop up shop at the @YouTube Live event this Thursday at 5p ET!” Taylor wrote under a photo of her and Stella checking out photos by their inspiration board, which was treated to a heavy dosage of pastels. Mark your calendars for Aug. 22 at 5 p.m. ET, because that’s when the “ME!” singer is teaming up with Stella for a @YouTube live event!

Taylor broke the big news that she’s teaming up with Stella in June. “There’s gonna be a collaboration that I’ve done with Stella McCartney. She’s been a friend for a really long time,” Taylor announced during an Instagram Live session on June 13, the same day she announced the release date of her seventh studio album. She continued to gush about her design partner, adding, “There’s so much whimsy and imagination and romance to the clothing that she designs. I’ve worn a lot of her stuff recently. She’s heard the new album, and this new collaboration is inspired by the Lover album.”

#StellaxTaylorSwift is coming soon 💘 It’s been SO much fun to work/dream up cute stuff with my friend @stellamccartney to create a line inspired by my new album Lover. Can’t wait to show you what we've been working on and tell you more about the pop up shop at the @YouTube Live event this Thursday at 5p ET! Sign up to receive more info at TaylorSwift.com and StellaMcCartney.com

Leading up to the anticipated release of Lover, Taylor has released the tracks “ME!,” “You Need To Calm Down,” “The Archer” and her lead single, “Lover.” The clock is ticking, and fans can’t wait to get a hold of the singer’s most romantic record yet this Friday — and now, with equally swoon-worthy clothes to match!