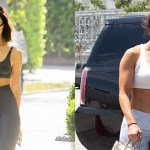 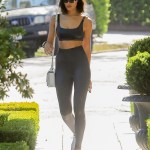 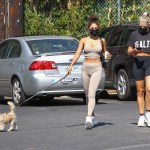 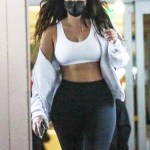 No, you’re not seeing double. Kendall Jenner and Hailey Baldwin looked nearly identical after working out, right down to the sports bras, sunglasses and smoothies!

The way that Kendall Jenner, 23, and Hailey Bieber (née Baldwin), 22, looked alike on Aug. 19 was truly remarkable. The besties exited a Hot Pilates class in West Hollywood and hit up a post-workout smoothie shop. Both Justin Bieber’s wife and the Keeping Up with the Kardashians star wore a sports bra, black leggings, and dark sunglasses. Their both had their hair up and carried a smoothie in their right hand (while holding onto their phone in the left.) If Hailey’s hair was dark and Kendall’s sports bra was black, it would be impossible to tell them apart at first glance.

So, where was Justin? Hailey’s 25-year-old husband is no stranger to Hot exercise. He joined his wife while attending a Hot Yoga class on Aug. 3. While they didn’t twin the same way Hailey and Kendall did, the couple kinda matched. Both she and the “I Don’t Care” singer wore neon colors. Justin rocked a bright purple t-shirt while she wore a neon-yellow sports bra. Did Justin bail on Kendall and Hailey’s Hot Pilates class because he couldn’t rock the sport bra/leggings combo?

Is there a cuter trio than Justin, Hailey, and Kendall? The three of them had an adorable interaction at the start of the summer. “These are the moments I live for,” Justin captioned a June 29 Instagram post. In the pic, he snuggled close to his wife in the desert while the sun set behind them. “Alone time with you refreshes my soul,” he added. “You are so out of my league, and I’m okay with that! You are mine, and I am yours.” This was such a sweet sentiment from Biebs…except Kendall took a slight exception, per PEOPLE. “She’s a little bit mine too,” she commented (Justin has since turned comments off for his posts) while including a raising hand emoji along with the Venus (female) symbol.

Actually, Hailey was a little bit Kylie Jenner’s before she “belonged” to Kendall. The model told Elle in 2018 that Justin’s wife “was actually best friends with Kylie, and I was good friends with her cousin Ireland [Baldwin]. Hailey lived in New York, and whenever we were there, we would hang out with her.” During Kendall’s first New York Fashion week, she “stole Hailey from Kylie. From then on, she was my homie. At first, Kylie was mad; I had to bring them back together and be like, ‘No, it’s okay, guys.’ But it’s all good; that’s our love story.”